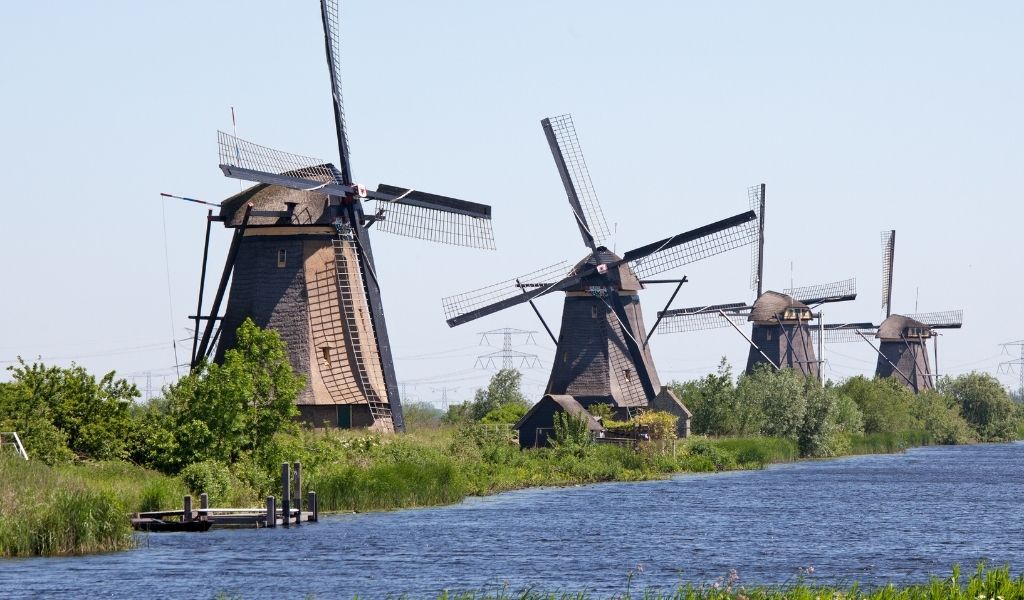 The Netherlands is one of the nicest countries in Europe to travel to because you can discover everything from flower fields, bustling cities, cheese markets, canals, beautiful museums and more.

To get a good idea of ​​what the Netherlands is famous for and to give you a better idea of ​​this country, I have compiled the list below.

Amsterdam is the capital city and the most popular destination for tourists in the Netherlands. Amsterdam is home to some of the best museums in the country and is best known for it’s canals that have earned it the name ‘Venice of the North’.

There are lots of weird and wonderful things to experience in the city, from the Red Light District to a cat boat. If you’re visiting Amsterdam, check out this 3 days in Amsterdam itinerary from a local that will cover the Anne Frank museums, Rijksmuseum and Vincent van Gogh Museum.

The Netherlands is a cycling country, everyone rides a bike because you learn it from a young age. The infrastructure has been built with cycling in mind so you can reach anywhere by bike and often faster than if you’d used other modes of transport where you might get stuck in traffic.

Because the Netherlands is a flat country, cycling isn’t difficult. Cities such as Amsterdam are full of cyclists because it saves you costs and you aren’t dependent on public transport. You can rent a bicycle anywhere in the Netherlands, no matter which town or city you visit, there is sure to be a bicycle shop.

If you are in Amsterdam you can rent a bicycle from Black-bikes for €7.50. They have 14 stores in Amsterdam, so there is always a store close by.

You’ll find one of the largest ports in the world in Rotterdam.

The modern city is full of interesting hip places. A great place to see is the yellow kubbes houses. The city is easily visited as a day trip from Amsterdam if you’re short on time.

It seems that most European countries have some form of cheese to claim, however, Dutch cheese is very well known, especially Gouda and Edam which is renowned across the world.

The cheese making industry isn’t new in Holland, in fact, cheese-making equipment has been discovered by archaeologists that dates back to 200 B.C. You can still visit many cheese markets across the country as well as museums dedicated to it.

The Netherlands is world-famous for its windmills with an estimated 1000 or more adorning the countryside, each one more beautiful than the other. Most windmills are no longer in use for commercial purposes.

An absolute highlight of the Netherlands is visiting the village of Kinderdijk. Here, you can find several windmills together which are classed as a UNESCO World Heritage site. This makes for an epic photo opportunity.

One of the most famous beers in the world comes from The Netherlands; Heineken. Originally created and brewed in Amsterdam, Heineken is now a global brand that brews beer in more than 70 different countries. If you visit the capital city, you can learn more about the history of the brand at the Heineken museum.

In addition to cheese, Netherland is also famous for its delft blue, this is the recognizable blue and white pottery such as vases and and plates. If you like it, you can buy a porcelain piece of Delft blue in many Dutch cities.

You can buy crockery to use as a souvenir at home. It is nice, for example, to buy a salt and pepper mill in porcelain, it isn’t extremely expensive and easy to carry. They are considered a collectors item and can often be worth a small fortune. The best city to buy delft blue porcelain is in Delft.

If you are looking for a more laid-back atmosphere in terms of the city, then Utrecht is the city for you. It looks like Amsterdam, only it isn’t that busy so the atmosphere is completely different. The historical center Utrecht is amazing to explore, the cathedral is the absolute highlight.

The center of Utrecht is wonderful to walk because cars are prohibited from the center. Everyone gets around in Utrecht using a bicycle. Here, you will find the largest bicycle parking spaces which can hold up to 12,500 bicycles at one time.

Football is the national sport of the Netherlands. If you want to experience a match in the Netherlands, Ajax, PSV, and Feyenoord are all world-class teams.

If you want to go for the atmosphere, the stadium De Kuip van Feyenoord is the place to be. All football fans in the Netherlands say that you must have been to De Kuip once in your life.

Considering Holland is one of the smallest countries in Europe, their national team is one of the best with legendary players such as Dennis Bergkamp and Robin van Persie having played for them in the past.

The Netherlands is the country with the largest export of flowers, especially tulips. From mid-March to mid-May, many tulip fields are a sea of beautiful colors, most of which are harvested and shipped.

It is best to go to the area around the village of Lisse to enjoy the flower fields. There’s nothing better than renting a bike and cycling along with the fields. You can also go to Keukenhof, here you can find the most beautiful spring garden in the world.

Bio: This article was written by Cynthia & Alexander, adventure travel bloggers from Travel your Memories. They are experts on the Netherlands. The couple travel the world and share all the tips to inspire and help you plan your trips.

European Bucket list: My Top 5 Places to Visit in Europe