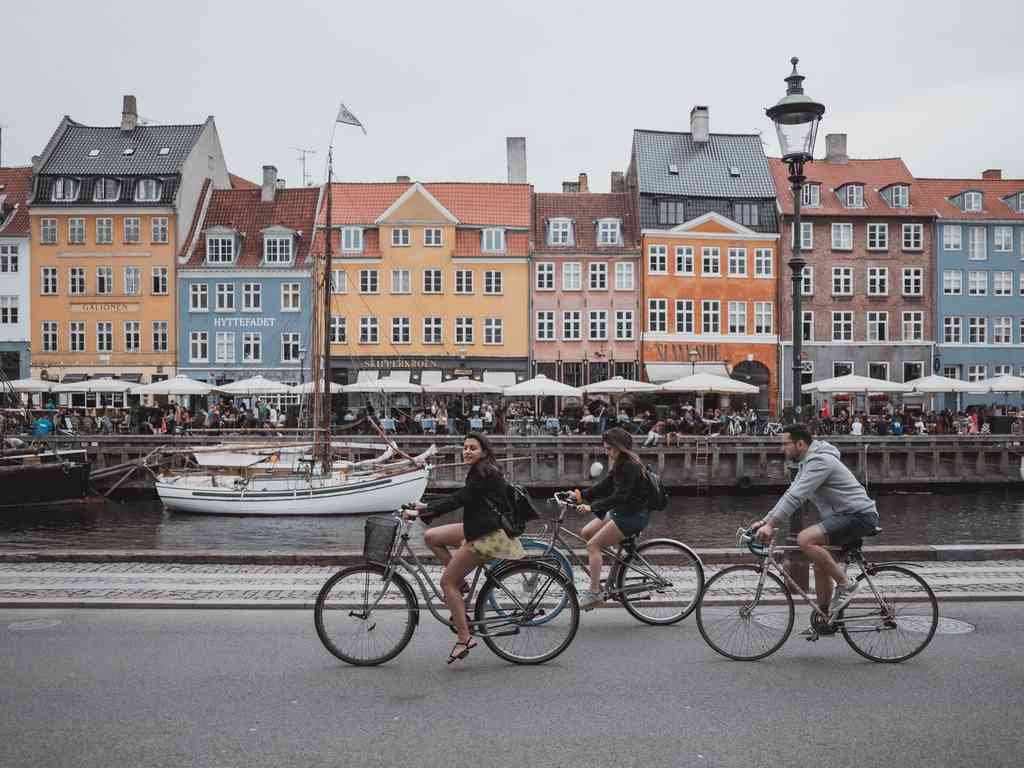 From the beautiful sunset behind the harbour to the hustle and bustle of the street food market, my first visit to the Danish capital was astounding. After spending some time there, it doesn’t come as a surprise that it’s one of the safest cities in the world and was voted one of the happiest places to live.

Denmark is also to thank for many popular inventions, including Lego and Insulin. On a walking tour of Copenhagen we learnt the story of the famous viking Harald Bluetooth, who help establish communication between Denmark and Norway. His name was later used for the well known technology we use today that was also invented in Denmark.

The capital encapsulates the creativity, innovation and culture of Denmark very well and should be top of your Scandinavian bucket list. Whether you’re spending one day in Copenhagen or a week, here are my some of my favourite activities in the city that won’t break the bank.

The Nyhavn (New Harbour) is a beautiful area. Brightly coloured cafes, bars and restaurants line the canal and the wooden ships give it an authentic feel. There is always a great atmosphere in this area of town, especially when the sun is shining, this is a must do in Copenhagen.

The Sandermans New Europe free walking tours are a favourite of mine, the Copenhagen tour did not disappoint. You’ll visit all the best Copenhagen attractions from the home of Hans Christian Anderson to the Danish Parliament.

It runs every day at 11am from the Dragon fountain. Remember, the tour may be “free” but the guides work for tips so I’d always recommend having some change to hand.

I particularly enjoyed hearing about the history of the city and how the Carlsberg brewery made such an impact on the city.

For a view across the entire city, consider visiting the tallest tower in Copenhagen at Christiansborg Palace – best of all, it’s completely free to head up the tower. Entry to the palace itself starts at 50DKK (about £6/€6.70/$8) but I gave this a miss.

If you’re planning to visit Copenhagen then make sure you check out Christiania, the city’s alternative neighbourhood. Originally a military base it was taken over by hippies in the 70’s.

It’s a strange area, best known for its vibrant scenery and open cannabis trade so I’d recommend visiting during the day if travelling solo or with children.

It has lots of independent cafes and restaurants that serve all sort sof cuisines, including a healthy amount of vegan choices. If you do visit later on, there is lots of live music venues with Jazz being a popular choice, be sure to check out Jazzklubben.

One of my favourite things to do in Copenhagen was to experience the city by water, you can either take the hop on hop off boat for a guided tour or use the cheaper harbour bus.

The boats go right up to the sea near the little mermaid statue and all the way back to the royal library so you’ll get the opportunity to see all of top Copenhagen attractions from the water.

One of Copenhagen’s top attractions is Rosenburg Castle. The 17th century building is easily accessible, located in the heart of the city near the botanical gardens. If you want to head inside it will cost you 110DKK (about £13) but just experiencing the gardens was enough for me on my tight budget.

It’s a wonderful place to relax and watch the world go by. I’d recommend taking a picnic and enjoying the surrounding parks which are particularly nice in summer when the flowers are in bloom and the sin is shining.

The botanical gardens make a great escape from the busy city in an enormous purpose-built greenhouse that forms part of the Danish natural history museum.

It has an extensive collection of plant species including some that are now extinct in the natural world, enough to enthuse any keen gardener or botanist. For those less interested in the species (myself included) it still makes a beautiful place for a tranquil afternoon on a budget.

An iconic Copenhagen attraction, no trip would be complete without a visit to the little mermaid. The statue was a gift to the city from brewer Carl Jacobsen and was inspired by ‘The Little Mermaid’. This is a fairy tale by famous Dutch author Hans Christian Andersen who lived in the city and tells the story of a mermaid who falls in love with a human prince and gives up everything to live with him on land.

I was a little underwhelmed by the statue itself which is a mere 4 feet high, but the stroll up to the statue and the wonderful views across the sea makes it a worthwhile way to spend a few hours and you don’t need to spend a penny.

Take a step back in time at the open air museum, located about 30 minutes outside of the main city. It’s a well-preserved Scandinavian village in a beautiful rural setting that will give you an insight in to life as early as the 17th century and you may even get to ride a horse and cart.

The original street food market on Paper Island was one of my favourite places to visit in Copenhagen. Located in an old warehouse it consisted of vendors selling food from all parts of the world as well as drinks and a great atmosphere.

SInce my visit, the original venue closed down, however I was thrilled to hear that a brand new street food market has now opened called Reffen, I can’t wait to visit again and try it out.

One of the highlights of my trip was visiting the Carlsberg factory. As you explore Copenhagen, you’ll start to appreciate how much of an influence the business had on the city and the interesting story about how it split in to two.

A visit to the factory is 115 DKK so not the cheapest thing on this list but still relatively affordable. With that you’ll get to see the original factory established by J.C. Jacobsen, you’ll gain an understanding of the brewing process and try some of the beers at the other end too. The above image is from the record breaking bottle collection that I was really impressed with at the museum.

I quickly discovered that Danish people love to cycle – Copenhagen looks like it was built for cycling. I spotted more bikes than cars and there are cycle lanes everywhere.

Hiring a bike from one of the many bicycle hire shops is a great budget activity which won’t cost any more than 75DKK (around £9) for the day. Alternatively, use the city bikes that have a built in screen for navigation but you may end up spending more for this.

Amager Beach Park is a small island with Copenhagen’s only stretch of sand. As well as beaches, the small island has sand dunes, cycling trails, walking paths and more. It’s accessed via the M2 metro line or you can cycle there from the city if you’re looking for a completely free activity.

14. Changing of the Guards at Amalienborg Palace

When the queen is home, the guards are accompanied by a band which adds a real atmosphere and arguably one of the best free attractions in Copenhagen. The march passes Round Tower and Kongens Nytorv before arriving at Amalienborg at 12 noon.