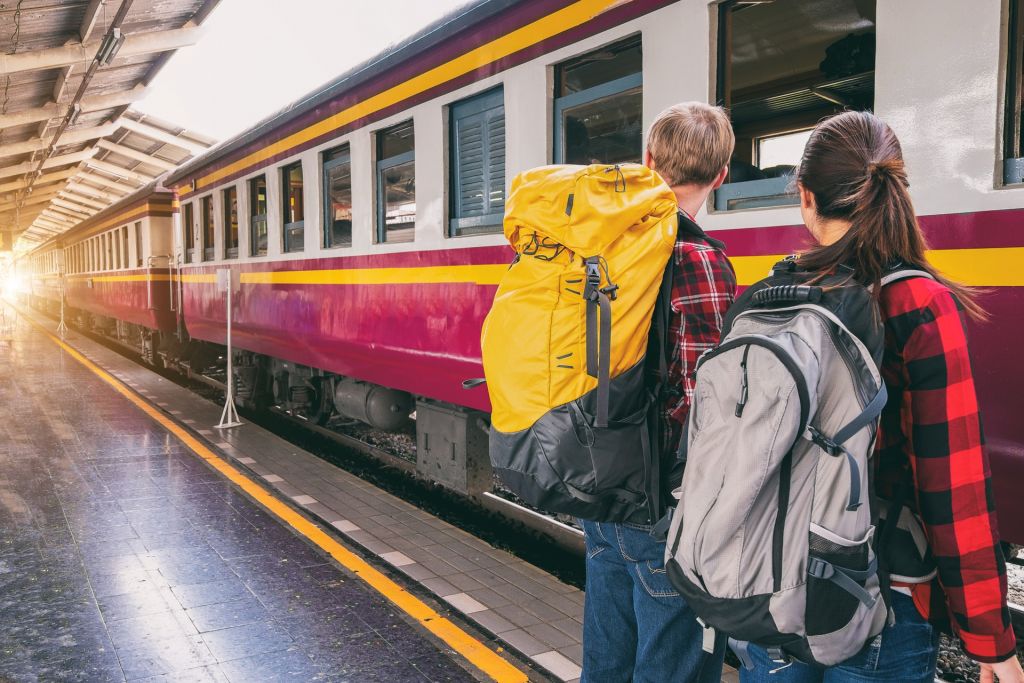 Britain’s train network is the oldest in the world, and with over 15,000km of train tracks across the country, it’s no surprise that it’s one of the most convenient ways to travel around the country.

But, train travel in Great Britain can be quite expensive if you don’t have a season pass or book in advance, this can be cumbersome for backpackers travelling around Britain. This is why they have launched Britrail, an interrail-esque pass for train travel in Britain. Here’s a full guide to help you understand whether its right for you.

How Does Train Travel in Britain Work?

To understand whether a Britrail pass is right for you, it’s worth understanding the basics of train travel in Britain:

A Britrail pass will allow you to travel on most trains across England, Wales and Scotland (see exceptions). There are two types of BritRail passes available.

Standard Adult: For anyone aged 26 – 59 who isn’t a British citizen

Youth Discount: If you’re 25 or under you can get a youth pass which is 20% cheaper than an adult pass.

Senior Discount: If you’re 60 or over you can get a senior pass which is 15% cheaper than an adult pass.

Group Discount: If you’re travelling in a group of 3 or more, you’ll be eligible for a 20% discount on your passes. However, you will need to continue travelling together otherwise the passes will not be valid.

As well as the standard Britrail pass, there are regional passes that are only valid in certain regions of the UK. If you’re travelling through multiple regions, you’ll need to ensure you have passes that are valid in both for that journey.

BritRail South West Pass – For train travel in the Southwest region from London across to Devon and Cornwall. Popular destinations covered include London, Bath, Oxford, Windsor Castle, Salisbury and Winchester. Also extends in to South Wales to Cardiff and Swansea.

BritRail Spirit of Scotland Pass – For train, coach and ferry travel across Scotland.

Note: Unlike other Britrail passes, the Scottish passes are only valid after 9.15am.

How Much Does Britrail Cost?

The cost of a BritRail pass is as follows:

Correct as of Aug 2019 – 2nd Class, travel in England, Wales and Scotland

How to use a Britrail Pass

Some of the Britrail passes are available as mobile passes. If you purchase a mobile pass (known as a Britrail M-pass), you’ll receive a download link to get your pass on your mobile. The pass is scanable at most ticket gates. Some ticket inspectors may not have a scanner but can check the M-pass manually.

With the exceptions of night trains, seat reservations are not required for travel on UK railways whether travelling with a Britrail pass or not. However, for long intercity journeys and those at rush hour you may want to reserve a seat otherwise you won’t be guaranteed one and may end up standing. Seat reservations can be made for free at stations with a ticket office.

Britrail is valid on the two main night trains in the UK:

Caledonia Sleeper – From London to Scotland and vice versa. A seat on the Caledonia sleeper is free with a reservation from the service centre on 0141 555 0888. However, for a bed you’ll need to pay a supplement of £100 for 1 person or £140 for 2 people which can be bought online from Sleeper.Scot.

Night Riviera – A Britrail pass is valid on the London to Cornwall Night Riviera sleeper however you’ll need a sleeper supplement at £80 for a single-berth room or £110 for a 2-berth room. Call great western telesales on 0345 7000 125 or visit a station.

The pass does not work on heritage railways, London Underground/Overground services, the Eurostar or other tram services such as Manchester Metrolink and Glasgow Underground.

Is It Worth Buying A Britrail Pass?

The cost of buying end-to-end tickets for the journey varied depending upon how far in advance the tickets were booked. Here is the summary of the costs I found.

The equivalent Britrail pass needed for this would be the flexible 15 days in one month pass costing £415 / €457.

Is it worth buying a Britrail pass?

Yes, if you are a youth, it will usually be cheaper to book a Britrail pass than end-to-end ticket, even if you book a month in advance.

However, If you’re an adult, it will be cheaper to book end-to-end tickets in advance as long as you can book at least one week ahead. If you need to be more spontaneous than this, then you’re better off getting a BritRail pass.

An Interrail pass is similar to Britrail only it covers train travel across the whole of Europe, these are only available to European citizens. For non-European citizens, a Eurail pass works in exactly the same way (I have no idea why these are separate).

Here are some common questions:

Should I get a Britrail pass or an Interrail one-country (GB) pass?

An Interrail one-country pass for Great Britain is identical to a Britrail pass in terms of the trains it covers. However, Britrail has more options with 12 varieties on sale, compared to 5. It is also worth bearing in mind the different benefits as outlined below.

Where there are comparable passes, Britrail is cheaper for youths BUT Interrail one-country GB is cheaper for adults. See pricing comparison table here.

Should I get a Britrail pass or an Interrail/Eurail global pass?

The answer to this question is not so clear cut as it depends on your trip. There are benefits and drawbacks of using a Britrail pass vs an Interrail pass, here is a summary of them.

🇬🇧 REGIONAL PASSES: Regional Britrail passes are available for England, Scotland, London and the South-West. These are even cheaper than the standard Britrail pass.

🇬🇧 SHORTER TIME LENGTHS: BritRail continuous passes start from 2 days, compared to a minimum of 15 for Interrail, and the flexible passes have the option of 2 days in 1 month which again is lower than Interrail offer.

🇬🇧 MOBILE: Unlike Interrail which only offer paper tickets at the moment, some of the BritRail passes are now available as mobile tickets. You can download your pass as a PDF to your phone, tablet or any other device and scan it at any barcode scanner. No more lost or torn passes!

🇬🇧 2 FOR 1 AT 200 ATTRACTIONS: With Britrail, get 2 for 1 entry at over 200 UK attractions, including football stadium tours, sightseeing tours, theme parks, national trust buildings, castles, museums, zoo’s and many more.

🌍 FLEXIBILITY: The beauty of Interrail is the single ticket with flexibility to travel freely between 31 countries whereas Britrail is limited to one country

🌍 LONGER TIME LENGTHS: Whilst Britrail has the upper hand for shorter passes, Interrail/Eurail global passes can last up to 3 months which is ideal for long backpacking adventures.

🌍 INBOUND/OUTBOUND JOURNEY: All global passes allow one inbound and one outbound journey in your home country (if you’re from an Interrail country)

🌍 OTHER DISCOUNTS: Get 10% discount at Meininger, St Christopher’s and Generator hostels in London and Edinburgh, up to 30% off ferries to Ireland or the Netherlands and 20% off Sandermans tours in London, Liverpool and Edinburgh

So in summary, if you’re only visiting Britain or spending a significant proportion of your trip in Britain then a Britrail pass will give you best value, especially if you’re in a small group to take full advantage of the benefits. If you’re visiting Britain as part of a much longer euro-backpacking trip then an Interrail/Eurail global pass will give you more flexibility.

Where to Buy Britrail Passes?

Britrail passes cannot be bought directly from Britrail, visit a third party vendor such as ACP rail to get one.

Interrail vs Flixbus vs Flying – Which I Choose to Travel Europe

A Guide to Interrailing in Italy