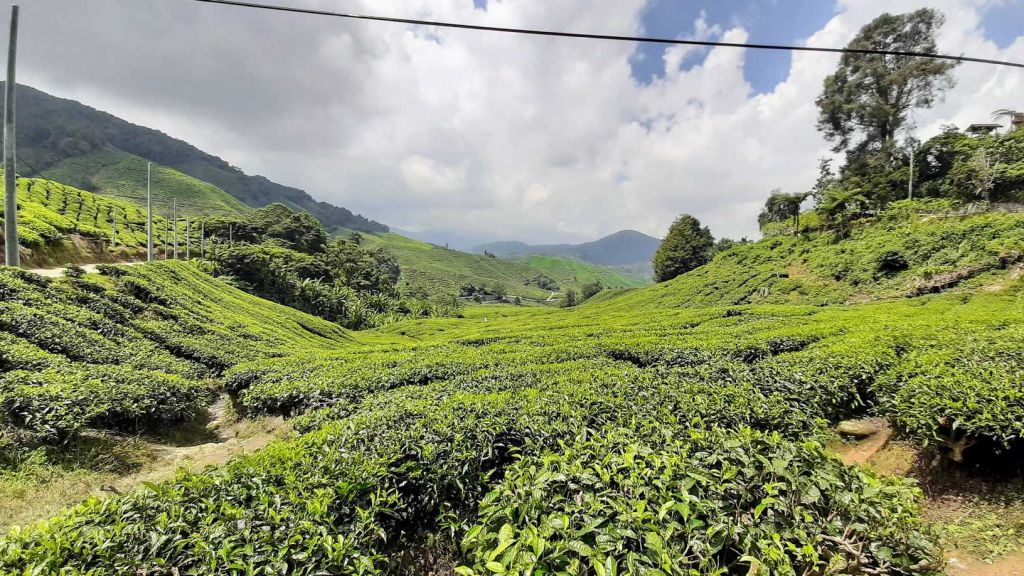 I must admit that I’d never heard of the Cameron Highlands before visiting Malaysia. It’s not one of those destinations that tends to sit at the top of anyone’s bucket list. But it really should be.

Getting there was an adventure in itself, I took a local bus from Penang which took us along winding mountain roads for almost 6 hours. Although the stunning views across the lush green Malaysian jungle made the journey a little more bearable.

The Cameron Highlands is actually the name of the large district covering 700 sq km in the state of Pahang, however most people only visit Cameron Highlands resort towns and villages situated in the north, the main ones being Tanah Rata and Brinchang.

The highlands range from 800m – 1,600m above sea level, resulting in a much cooler climate than some of the major cities in Malaysia such as Kuala Lumpur or Penang which was something I really appreciated.

Brief History of the Highlands

The highlands has long been home to Orang Asli settlements (aborigines), but the first official record about the Cameron Highlands was by British land surveyor William Cameron in 1885 whilst he was mapping the Titiwangsa Range.

But it wasn’t until the 1920’s that Sir George Maxell visited the region and decided to turn it in to a hill station. Over the proceeding years the resort flourished under British colonialism and despite set backs during Japanese occupation, the region has become a popular resort town for both Malaysian people and tourists.

Nowadays, the Cameron Highlands, along with the Taman Negara jungle are top reasons for visiting Malaysia amongst nature lovers.

Whilst there are a number of small towns and villages in the area that have guest houses, Tanah Rata, Malaysia is the best place to base yourself during your visit.

The town has plenty of choices for food, accommodation and is close to all the best things to do in the Cameron Highlands, including some of the hiking trails which begin here or can be reached with a short bus journey.

What is there to do in the Cameron Highlands?

The biggest draw of the region is the sheer beauty of the Malaysian countryside. For this reason, one of the most popular things to do in the Cameron Highlands is hiking and there are many trails to choose from.

The most popular option is to take route 10 up to the top of Gunung Jasar, you can then either return back down route 10 (as I did given it was about to rain) or you can take the more scenic option down route 6. This will take you to some of the tea plantations where you can see how the tea is grown and taste it first hand.

Another option is to take a hike up to Mount Brinchang and on the way you can explore the Mossy Forest. In this 200,000 year old forest, moss and lichen thrive due to the misty conditions that create a moist atmosphere and perfect growing conditions.

The first developments on the Cameron HIghlands were during the 1920’s under British Colonial rule. Being British, clearly it wouldn’t take long before they would realise how the growing conditions were perfect for tea plantations. The rich soil, cooler temperatures and high rainfall all contribute to a providing a great crop year round.

BOH Plantations is one of the largest tea growers in Malaysia, producing enough tea to make 5.5million cups every single day. Their tea centre is one of the must-do activities in the Cameron Highlands. As you arrive, the view across the plantations is incredible, tea plants as far as the horizon.

The region is also home to a large number of strawberry farms (perhaps another sign of British Colonial influence) that produce incredible strawberries, the only one’s actually grown in Malaysia. The climate means that strawberries can be grown all year around, you’ll just need to make sure that you get your hands on them before the other tourists.

The farm I visited allowed you to pick your own punnet or to try them in shakes, desserts, jams and a plethora of other dishes. Or you could be super British and have a strawberries and cream afternoon tea.

Given the location and size of this museum, i went in with fairly low expectations. But it definitely surpassed and turned out to be one of the best things to do in the Cameron Highlands. I learnt a huge amount about Malaysia’s recent history such as colonialism and it’s role in world war II, but also about the Highlands themselves and how they came to be.

There was also a massive collection of retro items, everything from old advertisements to unopened comic books.

The region also produces lots of honey with at least 5 bee farms. I visited EE Feng Gu bee farm which had a vast number of bee hives, a restaurant and shop selling honey and souvenirs. Unfortunately the bees are only active when the sun is out so I didn’t get a great view of them, but the entire attraction was free so I can’t complain.

Look out for the various other gardens situated in the surrounding areas of Tanah Rata, this includes a rose garden, lavender garden, various cactus gardens and a butterfly farm.

Should I take a guided tour or travel independently?

There are a number of tours that visit the Cameron Highlands attractions listed above. For most people, i would recommend visiting these attractions independently as the tours are hugely over priced.

You can rent a scooter at a reasonable rate from Tanah Rata or there is a bus that runs between the local towns for RM1.50 (approx £0.30/$0.36), you can catch this every hour from Tanah Rata bus station.

If, for any reason, you are uncomfortable travelling by your self, particularly for some of the walking routes such as the Mossy Forest, then of course you can take one of the guided tours if you’re willing to pay a premium.

The Mystery of Jim Thompson

One interesting part of the museum was about the disappearance of Jim Thompson in the Cameron Highlands. He was an American living in Thailand who helped bring the silk trade to prominence in Asia, often referred to as ‘the silk king’. He was holidaying in the Cameron Highlands during the Easter holidays, but on Easter Sunday he went for a stroll through the jungle on his own, never to return.

Immediately many local Orang Asli trackers were bought in to hunt for him. Over the coming days more than 500 people were involved in the search including the army, Malaysian police, locals and British officers also holidaying in the resort. After 11 days the search was called off and Jim was never found.

Everyone loves an unsolved mystery, this is one that will be talked about in the Cameron Highlands history for years to come.

What to Eat in the Cameron Highlands?

If you take a stroll down Tanah Rata high street, you’ll come across many food options, including local Malay dishes and lots of Indian options, expect to pay around RM10 for a meal at one of these restaurants.

You’ll notice many locals eating steamboats. The cooler temperatures of the highlands leave you craving some steaming hot meat and vegetables.

The Cameron Highlands isn’t the only resort to offer a retreat from the warm Malaysian climate. The state of Pahang is home to a number of hill stations with similar conditions such as Fraser’s Hill, Bukit Tinggi and the better known Genting Highlands.

Backpacking Cambodia as a Solo Traveller

Tasting the “Worlds Best Pepper” at La Plantation in Kampot

How to Spend 3 Weeks in Cambodia