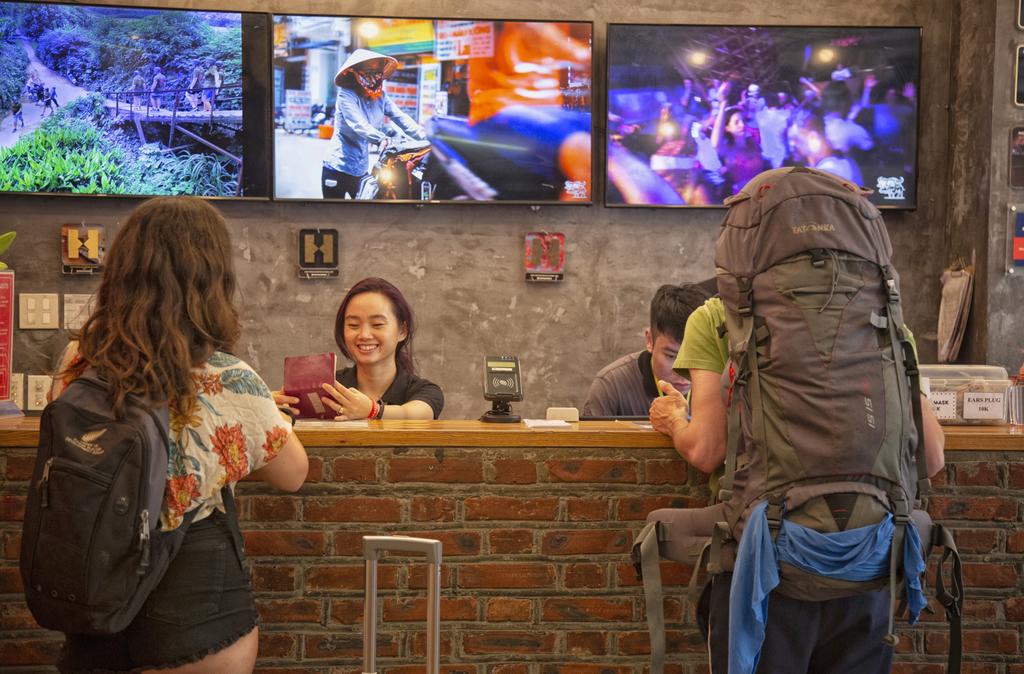 Even for the most seasoned traveller, a visit to Hanoi will be an assault on your senses.

The noise of the chaotic traffic as it weaves in and out of the streets, the eclectic smells coming from Hanoi’s street food vendors, and the humidity that makes even the shortest walk feel like hard work.

I visited Hanoi as part of my 4 weeks travelling through Vietnam and loved it. The north of Vietnam is full of picturesque destinations waiting to be discovered, so the city makes a great place to base yourself whilst you explore the region.

When it comes to the hostel scene in Hanoi, there is a lot of choice (too much!).

Whilst most hostels will offer free walking tours and some kind of free beer, each has its own atmosphere and some are better suited to solo travellers than others. Luckily, I’m here to help with this concise guide to the best hostels in Hanoi for solo travellers.

If you’re looking for a hostel as a solo travellers, it’s important to choose somewhere that has a good social vibe and ways to meet other travellers.

Overall, the best hostel in Hanoi for solo travellers is Central Backpackers Hostel.

It has a nice atmosphere that’s lively without being too over the top so it should suit most people.

They have a daily free walking tour as well as multi day tours to Sapa and Ha Long Bay so you’ll find others to go with.

For solo travellers who prefer a party, I’d recommend Vietnam Backpackers Hostel as the best hostel in Hanoi.

This chain is well known across Vietnam for it’s wild partying atmosphere and boozy evenings.

Their daily tours of the city make it ideal if you’re only planning a short trip to Hanoi, but if you have longer I recommend trying out their Castaways trip to Ha Long Bay for a fun filled few days.

Let’s jump in to my full round up of the best hostels in Hanoi for solo travellers:

Central Backpackers was my favourite hostel during my time in Hanoi. If you’re in the mood for socialising and mingling with other solo travellers, then the rooftop bar is the place to be. It offers free beer for one hour each evening (or until the beer runs out) and is followed by a lively pub crawl afterwards.

As all the socialising takes place on the rooftop, the rest of the hostel is fairly relaxed so you can chill out in the lobby area and get a good night’s sleep for those evenings where you don’t want to party.

It’s location in the old quarter is very convenient for accessing cheap food and drink. The facilities are up to scratch with great air conditioning in the rooms and a free breakfast.

From reception you can book on to their Hideaway Ha Long Bay tour (which is like a slightly toned down version of the infamous Castaways tour) or one of the Sapa trekking tours – this is great because you’ll end up on the tours with other backpackers from your hostel.

For those looking for a completely chilled vibe in Hanoi, then the Republik hostel is better suited. The hostel has a homely feel and all of the staff are very friendly.

Look out for the Vietnamese class which is run by one of the staff members, this is a nice touch which I haven’t seen in a hostel before.

For chilling out there is a Netflix room which you can use for relaxing or finding other solo travellers to explore the city with. Although this is not a party hostel, there is still free beer on offer and a pool table for making new friends.

In terms of location, this hostel is a little further out of the way than others on this list which perhaps explains the laid back atmosphere. The beds are comfy with curtains, fans and lights on each bed.

If you’re a solo traveller looking for a dorm room, but don’t want to forego the luxuries of a hotel (aka a flashpacker), then Little Charm hostel is just what you need.

This hostel has great facilities with comfortable pod-like beds that each have a private curtain and a dedicated locker operated by key card.

It also has a pool for a cool down swim away from the heat of Hanoi. The hostel is well located to access Hanoi’s old quarter for cheap Vietnamese food and drink, however if you prefer a taste of home then the restaurant has extensive food options including homemade pizza.

The only downside of this hostel is that it has limited social activities. There’s a bean bag area where you can chill and meet other travellers, but this is a hostel for solo travellers looking for a low key experience in Hanoi.

Did you think I’d leave out those true party animals amongst you? Of course not. There’s no better party hostel in Hanoi for solo travellers than Vietnam Backpackers Hostel.

With different activities every evening from pub quizzes to themed nights along with cocktails and happy hours, you’ll soon be making new friends and boozy memories.

Vietnam backpacker hostels are generally a younger audience and full of party animals so they won’t be everyone’s taste. I’m getting to the point in my late twenties where the full on party atmosphere can be a bit overwhelming, but luckily you can visit the bar and social area without staying at the hostel, you’ll just need to load some money on to a wristband and enjoy the night.

The facilities at VBH Hanoi are also quite good. Expect clean comfy bedrooms with large lockers and great powerful showers as far as hostels go.

The only downside to VBH is that it’s a tad more expensive than other hostels in Hanoi because they’ve built such a strong brand.

Other Hostels in Vietnam: