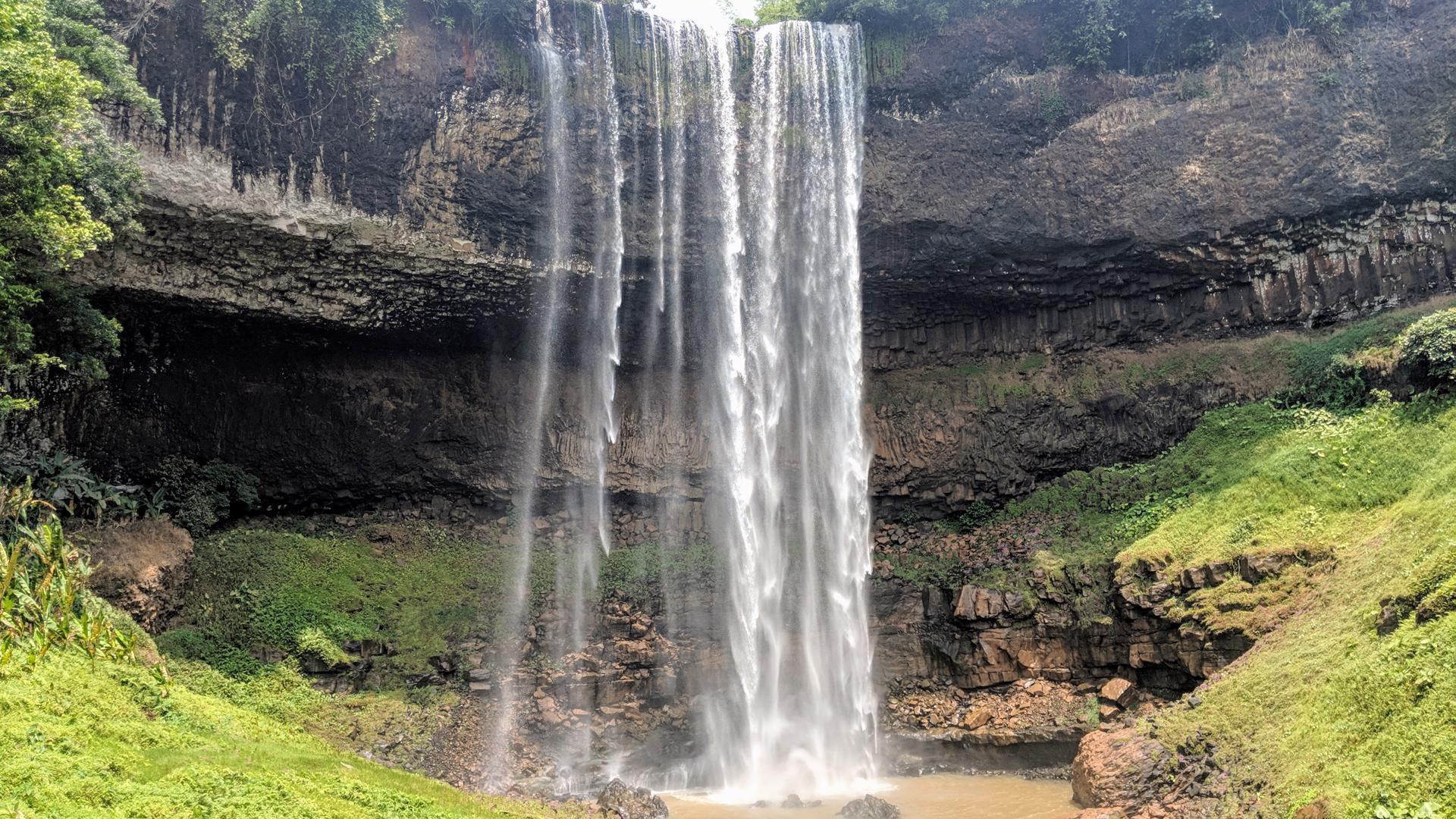 Laos may be one of the least developed countries in South East Asia but it is by no means any less beautiful.

The north of the country has been part of the backpacker ‘banana pancake’ trail for some time. However, head further South and tourism is still a relatively up and coming which means there are some great little-known gems.

The highlight of my time backpacking through Laos so far has to be the Bolaven Plateau, a trail of incredible waterfalls, coffee plantations and amazing scenery nestled away in the highlands of Champassak Province.

The starting point for the Bolaven Plateau is Pakse (sometimes it is also called the Pakse loop) and you can choose to do the big loop, small loop or craft your own route as we did.

There are organised tours that visit certain parts of the loop, these usually last 1 or 2 days. But the best part about the loop was riding through the beautiful scenery so doing it yourself is definitely beneficial.

Here is a summary of my 4 Day Itinerary around the Bolaven Plateau Loop with drive times included:

Where to Hire a Bike for Bolaven Plateau

I can highly recommend Miss Noy for bike or scooter hire in Pakse. You’ll be given all the information about places you can visit and where to stay.

Each evening, Yves from Miss Noy gives an information session where he runs through all the details you’ll need for your trip. This is excellent as a solo traveller as it was an opportunity to meet others doing the trip too. I met 2 other solo travellers and we ended up doing the loop together.

Detailed Itinerary for the Loop

Here’s how we decided to spend 4 days on the Bolaven Plateau.

On the first day we set off around 9am. The first waterfall on our trip was Tad Pha Suam, a 6m high U-shaped waterfall accessed by driving across a wooden bridge.

The fall was about 5 minutes from the main road and entry was 12,000kip.

We’d been told that this waterfall wasn’t in the same league as the others on the route so I couldn’t possibly imagine how amazing the others would be.

After a short dip in the refreshing water we jumped back on our bikes in search of some coffee.

We visited Mr Viengs coffee plantation, luckily, we were just in time for one of his tours. There doesn’t appear to be any set times for the tours but depends upon how busy he is.

Mr Vieng was lovely and gave us a good lesson on growing coffee. He grew three types of bean; Arabica, Robusta and Leberica, with Arabica being the smallest and most delicious and Leberica being bigger and cheaper.

He talked us through the process from picking and drying the coffee fruit, removing the shell and choosing the best beans to sell to his customers – he joked that he would sent the rest to Nescafe.

After the tour we were able to taste some of the coffee, and it sure was good! The plantation tour was 15,000kip and coffee was 10,000kip.

Our first overnight stop during out 4 day Bolaven Plateau itinerary would be the small village of Tat Lo. This village has a waterfall with ladders to climb up and if you’re there around 4.30pm, head a little further past the waterfall to the elephant sanctuary to see them washing their elephants.

To kick off day 2 on the Pakse Loop, we headed for Captain Hook to learn about his ethnic Katu village. The only information we had been armed with was to “ask for Captain Hook and to keep an open mind”.

Captain Hook lives in a Katu village of around 725 people who follow ancient Katu culture and traditions. It was a huge culture shock and I could see why we were told to keep an open mind, their tradition involved smoking from the age of 3 and getting married at 8 years old.

Villagers would live with their parents until they die, Captain Hook explained that at one point there were over 200 people living in one house.

The Laos government are attempting to modernise these ethnic villagers so now all children must go to primary school, men can only have one wife and modern medicines are used but there is still a long way to go.

The most harrowing part of the tour was when we were told about the sacrifices they make to keep evil spirits away, this involves kicking a puppy to death – we were all taken aback when he explained this. The tour is not for the faint hearted!

After the tour we were able to taste some of Captain Hooks coffee in a traditional bamboo coffee filter.

Drive to Tad Tayicsua (name of the place)

Keen to spend a full day at Tad Tayicsua, we decided to divulge from the traditional Bolaven Plateau big loop and cut across the mountains to Tad Tayicsua.

The drive was beautiful and having spent a lot of time in the 40° heat of Laos, it was refreshing to drive through the cool mountains. The final part of the journey involved about 15km on a dirt road which was a bit slippery in places but the views were incredible.

We stayed at a guesthouse right near the waterfalls which was an ideal location and the price was okay at 50,000 kip per person for a dorm room. Although a few of us were ill from the food so be careful.

On our third day, we spent the entire morning and most of the afternoon discovering waterfalls at Tad Tayicsua, there are 7 in total and all are in walking distance so we didn’t use the bikes at all.

Jarou Halang (also known as Tad Alang) was the first waterfall of the day. At 100m high it was the tallest and most impressive of the day. It was so big that we could feel the mist coming from it before even seeing the waterfall itself.

Next we followed the path to JaRou ThaLaLeui. This wasn’t necessarily a waterfall but a series of river rapids which were great for swimming and relaxing in.

The next waterfall was JarRou ManDreun, we had somehow ended up on top of the waterfall which was amazing to sit on the edge and watch it flow. We couldn’t quite work out how to get to the bottom though I’m sure it’s possible somehow.

We had planned to visit a few additional waterfalls before dark but a rain storm soon put a stop to that plan. Instead we returned to the restaurant for a relaxing evening.

Before leaving Tad Tayicsua, we went in search of a few more waterfalls. Jarou YeRe was the first stop of the day, followed by a short trek down to Jarou Kiet Oak.

We then headed towards Paksong where we had saved the best waterfalls on our 4 day itinerary until last; Tad Yuang and Tad Fane.

Tad Yuang is a beautiful waterfall that flows like champagne over a 40m drop. Nearby is Tad Fane, this is the largest fall on the plateau with twin streams that hurtle into the depths of the jungle. If you’re feeling adventurous, it’s possible to zipline across the valley of Tad Fane.

Unfortunately I’d picked up a stomach bug so opted to head straight back to Pakse but the rest of the group said it was the highlight of the loop and shared these photos:

I can highly recommend the Bolaven Plateau to anyone who is visiting Pakse and has some time available. If you can’t spare 4 days, there are routes to do it in 2 or 3 days too.

Other Loops in the Region

If you enjoy the Bolaven Plateau, there are a number of other motorcycle loops in the region worth checking out: 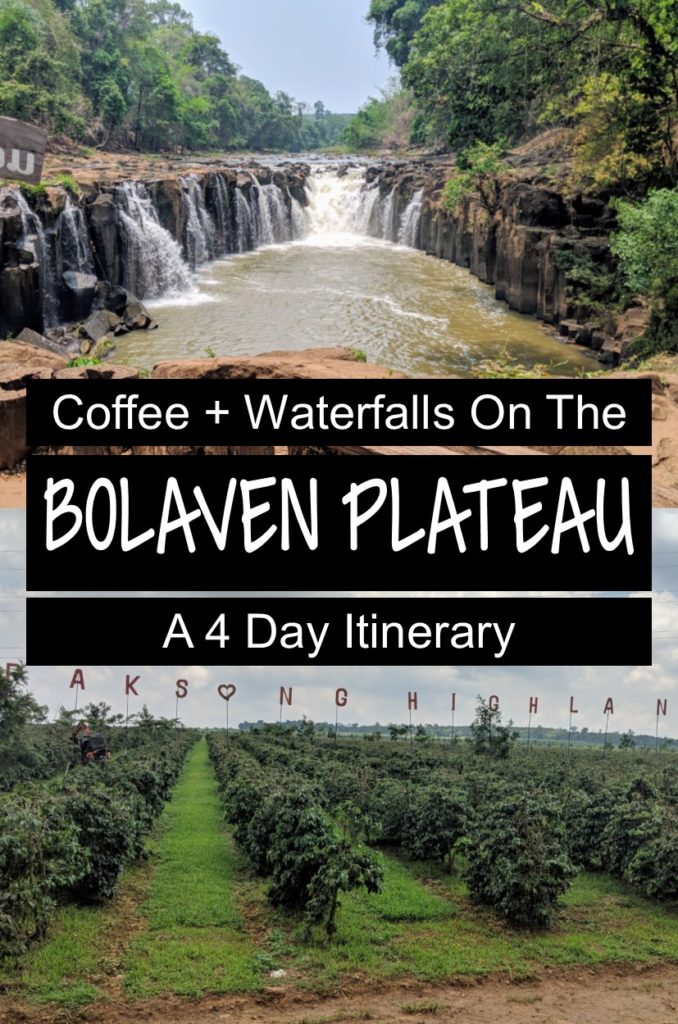