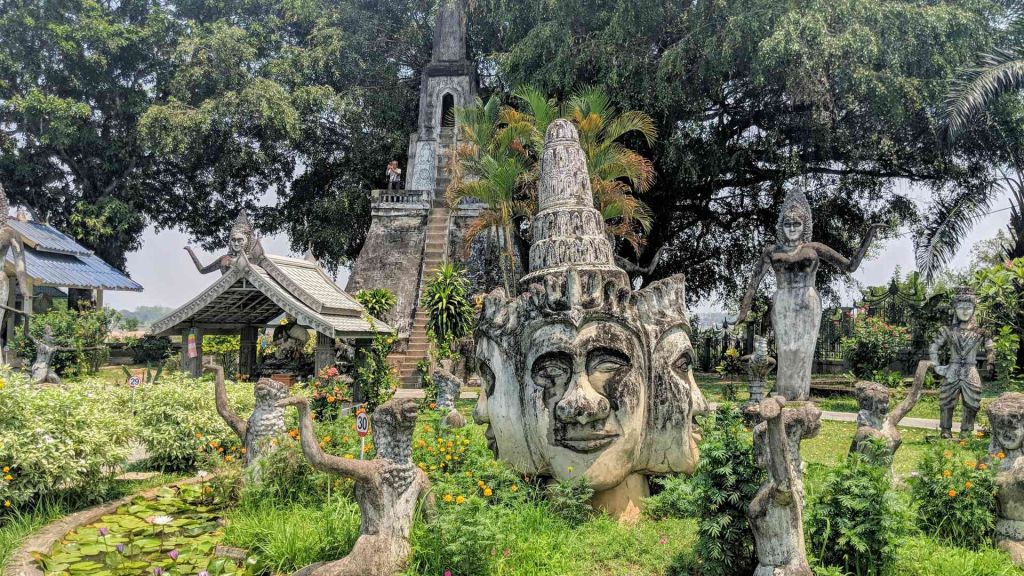 Laos capital city, Vientiane, has a reputation for being a little boring. But, if you seek out the right activities, it can be a great place to spend a few days.

Don’t expect the hustle and bustle of other major cities in the region. Home to fewer than 1 million people, it’s the second smallest capital in the region by population (Bandar Seri Begawan being the smallest) and has a super laid back vibe.

Like the rest of the country, the city is very affordable to visit so you’ll have a great time without needing to splash the cash. I’ve pulled together some of the top budget things to do in Vientiane.

Where to stay in Vientiane

I stayed at Barn 1920’s hostel which has a really cool vibe. The hostel has a vintage theme with staff dressed like they are from the 1920’s and a record player with old music.

Although it’s not the cheapest hostel in the capital, it has free breakfast, self-serve kitchen facilities and free bicycle hire so is definitely worthwhile. The staff were also very helpful and told me all the best places to go in Vientiane.

1. Climb to the top of the Patuxai

The Patuxai is a huge victory monument built to commemorate those who lost their lives serving their country in both the Vietnam war and the fight for independence.

You’ll notice that it resembles the Arc de Triomphe in Paris although it has been given a Laos touch in the decoration.

For just 3,000 kip you can climb to the top for a magnificent view across the city in all directions making it one of the top things to do in Vientiane.

Laos’ most sacred monument, Pha That Luang, can be found in Vientiane. Also known as The Great Stupa, this 45m tall shrine is covered in gold and believed to have originally been built to house one of Buddha’s bones.

The current structure isn’t the original as it was rebuilt in the 1930’s based on some earlier designs, witnessing this is a must do in Vientiane. Entry to the structure cost just 5,000 kip.

Perhaps the best known of Vientiane’s attraction, the Buddha park is located about 1 hour outside the city. As you wonder through the park you’ll see hundreds of statues depicting Buddha, Shiva, Vishnu and other figures from Buddhist and Hindu mythology.

There is also a giant dome that you can enter and climb up 3 floors to reach the roof for a great view of the park. The 3 floors are supposed to represent Hell, Earth and Heaven with the entrance carved to look like a huge demon.

There is also a 40m long reclining Buddha image similar to those found in temples throughout Laos and Thailand.

The combination of a delicious beer and a sunset view is always a winner. If you’re visiting Laos, you won’t be able to escape the country’s national beer, Beer Lao. Compared to other popular beers in the region, Beer Lao is one of the better ones, perfect when served ice cold.

My favourite bar to watch the sunset was Bor Pen Nyang, located near the Mekong river front with a view across the busy night market. The bar is free to enter and a beer costs 15,000 kip, a little more expensive than the rest of the city but worth it for the view. The entry is a little difficult to find but look for the shop ‘Mini So’ to locate the stairwell.

5. Learn about Lao history at the COPE centre

For me, one of the most interesting, yet harrowing things about visiting Laos was learning about it’s role in the Vietnam war and it’s title as the most bombed country in the world.

COPE (Cooperative Orthotic & Prosthetic Enterprise) is an organisation that helps victims of unexploded bombs by providing prosthetic limbs so that they can continue to live their lives as normally as possible. The COPE visitor centre is a free museum with information about the war, the unexploded bombs and the work that COPE and other organisations are doing to improve the lives of victims and prevent further accidents from happening.

I’d already visited the UXO museum in Luang Prabang which is of a similar nature and the information on display in the COPE centre really compliments this. I’d recommend including this top attraction on any Laos Itinerary.

Laos is renowned for it’s coffee with some of the finest beans grown in the volcanic soil of the Bolaven Plateau. Some of this coffee can be sampled in the many cafes and bakeries scattered through Vientiane. Look for Café Sinouk, a chain of cafes found throughout Laos who use coffee beans grown at its own coffee plantations on the Bolaven Plateau.

Found near the riverfront overlooking the Mekong, the daily night market is a must-do in Vientiane. Here you’ll find an array of clothing, souvenirs and electronics in a market that is very clean and orderly compared to many markets in South East Asia.

After you’ve picked up a few bargains, there are many street food stalls and reasonably priced restaurants nearby.

A local gave me a tip off about free meditation sessions at one of the city’s temples every Saturday. Luckily I would be staying in the city over a weekend so I had to try this out. The sessions were at 3pm in Wat Sok Pa Luang, a short cycle from the city centre.

The session was split in two halves, during the first half we were just talking to the monks who were hosting the session, this is so that they can practice their English which was of varying levels from beginner to almost fluent. Next was the Vipassana meditation, we did 3 short spells of meditation including walking meditation and quickly learnt how difficult it would be.

Other posts about Laos on my blog:

Coffee and Waterfalls on the Bolaven Plateau Loop