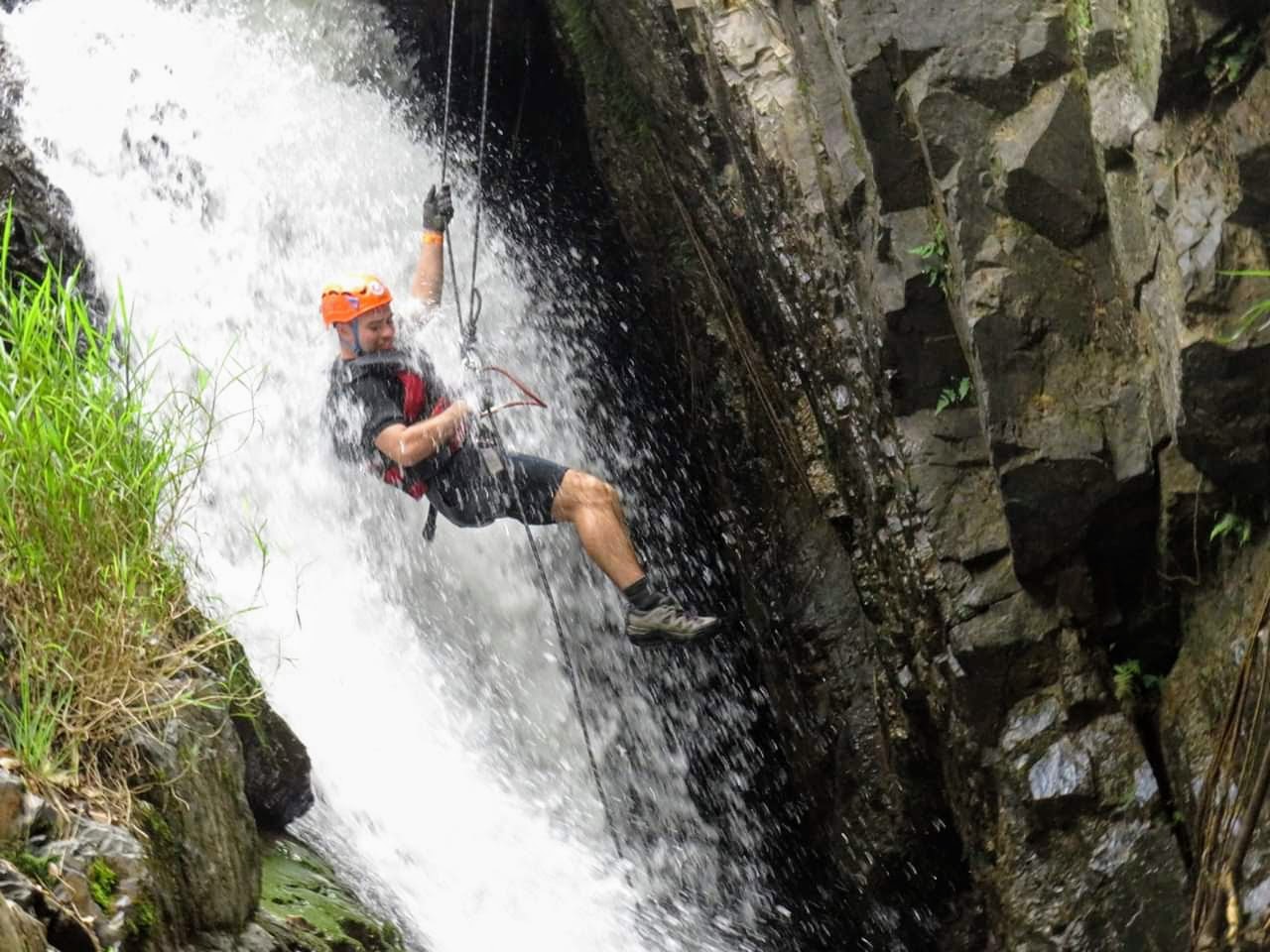 The small city of Dalat hidden away in the highlands of Southern Vietnam ended up being one of my favourite stops in the country. The cooler climate was a much needed break from the scorching heat in the rest of the country and there were huge variety of activities to keep you busy.

A number of people had recommended I try canyoning whilst there, I wasn’t really sure what to expect but decided to give it a go.

What is Canyoning in Dalat?

On a canyoning adventure tour, you’ll follow the river from Datanla Falls as it flows through the canyon, abseiling off the cliffs, swimming, sliding down rapids, taking ziplines and cliff jumps – it’s not for the faint hearted!

How much does it cost?

I booked the trip through Highland Holiday Tours which was recommended to me as the best Dalat canyoning tour, the cost was 1,600,000₫ (approx. $70 / £55). Although it’s expensive compared to other activities in South East Asia, it is still an absolute bargain if you compare to western prices and in my opinion was well worth the cost.

We were picked up by our guides Jerry, Tee and Tony who looked after us throughout the day. I can’t speak highly enough of Highland adventure travel. Even though I was travelling alone, it didn’t take long for them to establish a good team spirit and get us all excited for the day ahead.

The canyoning took place at Datanla falls, one of the best waterfalls in Dalat and home to the Alpine Roller Coaster where the track weaves in and out of the woodland area.

Check out my 3 day Dalat itinerary for more activities to try on your visit.

Luckily, Highland Holiday Tours provides most of the equipment you need from harnesses to safety gear.

You’ll need to take some clothes that you don’t mind getting wet and some dry clothes for after.

They will provide a day bag to keep all your gadgets in so that they’re safe and dry. All food for the day is also provided.

A pair of water hiking shoes would go down well, but they provide shoes if not.

What to Expect From Canyoning in Dalat

We began the day with a quick abseiling lesson and a few practice runs down a short wall. Canyoning is suitable for all abilities, even though most of the group had never abseiled before, the guides were super accommodating and made sure everyone knew what they were doing and felt comfortable before moving on.

We took a short trek through the main tourists area of Datanla falls until arriving at the first waterfall we would abseil down. Looking over the cliff edge was a little daunting and a huge step up from out short practice wall that I had easily glided down.

Strapped up and leaning over the edge of a waterfall, there was no backing out now! Plucking up the courage to step backwards off the cliff was the hardest part, but once in position it was much easier to walk down.

As well as carrying enough water to keep us hydrated through the day, the guides also had camera’s with them to capture our adventure. These were all provided free of charge afterwards – be ready for some cheesy poses!

All but one were brave enough to do the first abseil. We then headed a little downstream where we arrived at the next challenge, the zip line.

We were instructed to keep our bodies as straight as possible as the cable went in close proximity to a few rocks. My weight saw me go a lot faster than the two girls that preceded me and keeping a straight body proved difficult. At the end the zip line throws you straight in to a splash pool to slow you down.

Following the river down the canyon we arrived at the ‘water slide’. This was a small run of river rapids that were particularly smooth allowing us to lie on our backs with crossed arms and slide down. This was a lot of fun and surprising that it didn’t hurt at all.

In the meantime, guide Tee had gone ahead and set up a picnic lunch for us just a little further down stream. Obviously, being in Vietnam, it was a Bahn Mi, and a super delicious one!

We sat next to a waterfall eating to our hearts contempt. There was so much food, I definitely over-ate.

No rest for the wicked, with bellies stuffed full of Bahn Mi, it was time for the biggest waterfall of the day. This time we would be going down the actual waterfall, this meant shoes off so that we could grip better and be prepared to get wet.

Tony told us that we wouldn’t be able to abseil all the way to the bottom as the rock face retracts slightly near the end so on his instruction we would have to let go of our ropes and push ourselves away from the cliff and into the splash pool.

This seemed fine, until I was halfway down and he gave the instruction, a lot earlier than I had anticipated. I thought he was joking – he wasn’t! Trying not to think about the drop below, I held my nose and launched myself backwards, what an adrenaline rush!

A Leap of Faith – Maybe Not

When it came to the cliff jump, this is where I finally drew the line. As much as I’m happy to abseil down the waterfalls, this made me very uneasy.

Looking down at the 7m jump I couldn’t bring myself to take the leap of faith off the edge, no matter how much the team cheered me on. Luckily, there were a few in the group who felt the same so I didn’t feel as bad.

The final challenge of the Dalat canyoning tour was called the washing machine. We weren’t given much information about this one and looking over the edge didn’t help much either as we couldn’t see far below. All I could see was a waterfall and then nothing.

One by one the group would disappear down the cliff, we couldn’t see what was happening.

Placing my faith in the instructors I went for it. Half way down, the cliff disappears and you are left to slide through the air, with the might of the waterfall keeping you moving. I ended with a mouth full of water and a real sense of pride at completing (almost) all of the challenges.

It had been an incredible day with Highland Holiday Tours, as we walked back to the mini van with tired faces we were greeted with one last surprise, an ice cold beer, perfect end to the day.

Things To Do In Dalat, Vietnam [With 3 Day Itinerary]