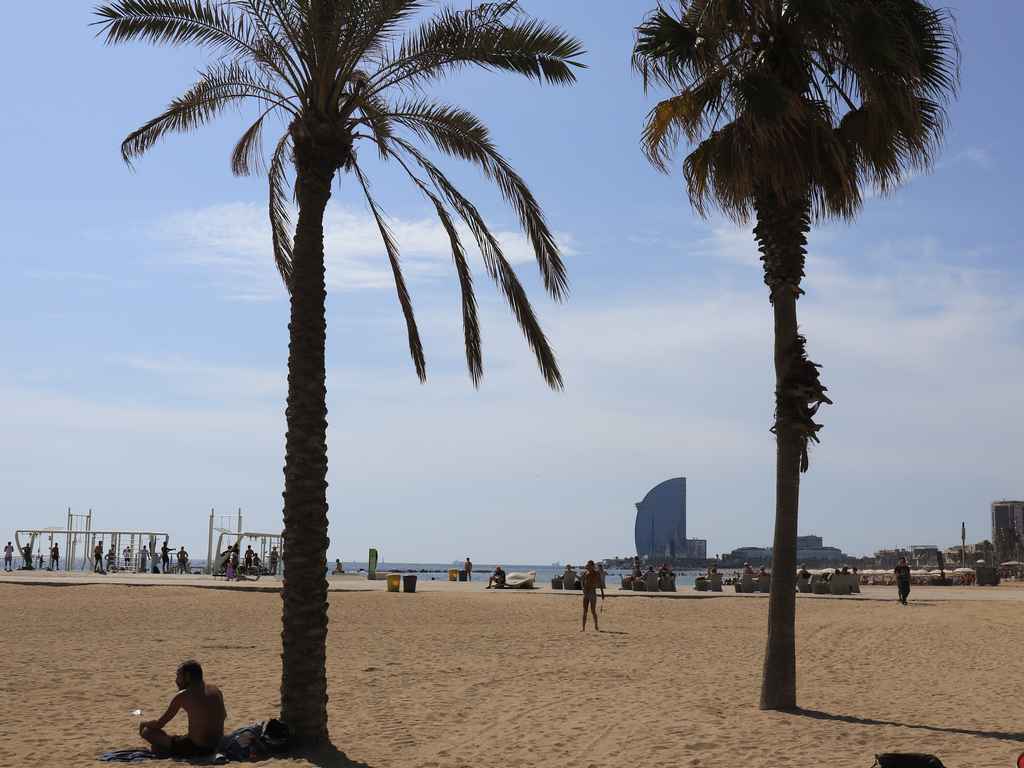 Spain’s most visited city, Barcelona, was voted the best beach city by National Geographic, and it’s not surprising. The city boasts some impressive attractions, not least it’s 9 UNESCO heritage sites, Europe’s largest urban park and a world famous basilica over a hundred years in the making.

From as personal perspective, Barcelona is my favourite city in Europe. The lure of a bustling city with both a beach and a mountain range on its doorstep has drawn me back time and time again.

I have stayed in a number of different hostels across the city, but my favourite hostel to date has to be Sant Jordi Rock Palace hostel. Not only does the hostel have decent facilities including a well equipped kitchen, a roof terrace with pool and decent beds, but the hostel also has a great social vibe with a free evening meal and bar crawl each night.

This hostel is quite lively, if you’d prefer something a little quieter then check out my full list of hostel recommendations for solo travellers in Barcelona.

Fun Fact: Barcelona was almost home to the Eiffel Tower. The towers creator, Gustave Eiffel, had originally proposed the project for Barcelona but the government said it was too radical.

Tips for Eating Out Alone in Barcelona

There are an abundance of amazing restaurants in Barcelona so you’ll never be far from something suited to your taste. If you’re planning to eat alone, I’d recommend eating at non-peak times, restaurants in Barcelona can get very busy and a solo diner can easily fall to the bottom of the priority list for waiters. Generally eating times in Spain are a lot later than the rest of Europe (it must be that siesta), so I turned to eat out around 7pm in the evenings.

My absoloute number one travel tip when visiting Spain is to try Tapas, especially in Barcelona. Tapas is best when shared so for solo travellers, I can recommend spending an evening on the Sandermans tapas tour.

Running each night and lasting around 3 hours, the tour attracts a variety of other tourists including families, retirees, backpackers and other solo travellers. It’s a sure fire way to have a fun-filled social evening indulging in Spanish culture and you might even get to sample some Sangria to keep the Spanish theme going.

Take something to do while you wait

If I’m eating alone, sometimes it’s nice to sit and watch the world go by, but other times I like to have something to do. Whilst you could always use your phone to browse the internet or play a game, I’ll often take something a little more relaxing like a journal to capture my thoughts or a magazine to read.

Top Things To Do on Your Own During the Day

Experience the best of Barcelona with a knowledgeable guide on a free walking tour. I recommend the Sandermans free walking tour, a combination of entertaining stories and historical facts are sure to result in a great time.

As a solo traveller, these tours are always great for meeting other tourists whilst getting oriented with a city. The Sandermans tours are advertised in many hostels throughout Barcelona so tend to attract plenty of other solo travellers with whom you might end up bonding and spending the day together.

Despite the fact that this basilica is not yet complete, it’s already one of Spain’s most famous landmarks and synonymous with Barcelona.. Gaudi wasn’t the original designer but when he took over as lead architect in 1883 he significantly transformed the design and dedicated the rest of his life to the project.

His death in 1926 came at a time when just 25% of the project was complete. Today, the basilica is open for tourists, with the ticket proceeds helping fund ongoing construction. The project should be complete by 2026, marking 100 years after Gaudi’s death.

Gaudi’s nature-inspired design is right at home with nature itself at Park Güell. Most of the park is free to access providing access to fantastic views across Barcelona.

However, the Monumental zone contains most of the famous sculptures and the best viewpoints, this area of the park is ticketed with only 400 visitors allowed to enter per hour so you’ll need to book a time slot in advance. I personally think this area is worth paying for if you’re making the trip.

Responsible for 7 of the city’s 9 UNESCO heritage sites, you can’t escape Antoni Gaudi’s influence in Barcelona. In addition to the Sagrada Familia and Park Güell, look out for other works across the city ranging from street lights designed at the early stages of his career to private residences such as Casa Battlo and Casa Mila towards the end of his career. His distinct style is easily recognised.

Barceloneta beach didn’t exist before 1992 when it was created for the summer Olympics, but since then it has become an important feature of the city. As well as a popular spot to relax in the sun, the beach is also a popular place for swimming, volleyball and it’s outdoor gym area. The area around the beach had an array of hipster bars, restaurants and some of the city’s most popular night clubs.

Barcelona is a big city with plenty of attractions spread across it, hiring a bike is a great way to get out and experience them. When I’m solo travelling in Barcelona, I particularly enjoyed getting up early for a leisurely ride around the city. I was able to hire a bike from my hostel but Green Bikes Barcelona have also been recommended to me. I visited the area around Parc de la Cituadella and the sea front, but there are plenty of other cycle routes you could take across the city.

If you’ve got football on your mind, then a visit to Camp Nou will likely be on the cards. You can buy tickets at the entrance and there is no limit on visitor numbers like some of the other Barcelona attractions, however if you’re visiting during summer holidays it may be worth booking ahead of time in order to skip the queue, this is what I did. There is a guided audio tour through the museum, pitch, changing rooms and press area. A selfie stick or tripod might be helpful if you’re travelling alone as there are endless photo opportunities.

There are endless choices when it comes to day trips from Barcelona, but my two favourites are Montserrat, a monastery atop a mountain just outside Barcelona reached via a cable car, and spotting game of thrones filming locations in Girona.

Fun Fact: Barcelona has 55 museums including the Picasso Museum, the National Museum of Catalonian Art and the Contemporary Art Museum. However, the most popular museum is the FC Barcelona Museum with 1.5 million visitors per year.

Top Things To Do on Your Own During the Evening

This traditional Spanish form of dance involving tap dancing, hand clapping and entertaining dance moves. It’s often accompanied by live music on the guitar and singing which makes for a fun filled evening.

You might want to try your hand at a flamenco dance lesson, or you can just opt to watch a show, I can recommend the well respected Los Tarrantos which holds multiple shows each evening and is conveniently located on Plaça Reial in the Gothic Quarter.

It’s always nice to end a day exploring with a few drinks in a bar. If your not staying in a hostel with a bar or it’s not very lively, then I can recommend heading over to Belushis.

This bar attracts a lot of other travellers due to being situated on the ground floor of St Christopher’s Inn Hostel so you’ll surely meet some like minded individuals to hang out with.

Many tourists will flock to Parc Guell for sunset but the view is usually obstructed. As an alternative I’d recommend Bunkers Del Carmen for sunset. These old bunkers were built during the Spanish civil war when they housed a number of anti-aircraft guns to protect the city from fascists.

Today, they are a popular spot to enjoy the panoramic view of the city and watch the sun go down. I recommend bringing a cold beer and snack or you can usually buy one from a vendor at the top.

Barcelona attracts heaps of solo travellers looking to party the night away so a group pub crawl is never hard to find. If you’re staying at the Sant Jordi Rock Palace Hostel as I recommended above, or any of the hostels in the chain, there is a free pub crawl each evening which I really enjoyed. Alternatively, I met some travellers who tried the generator pub crawl for €15 and said they had a blast.

How Much Does it Cost?

My most recent trip was a total of 4 nights in the city. In order to take advantage of cheap Ryanair flights from Manchester, I arrived and departed late in the evening, giving me 4 full days to explore the city. I decided to get out of the city a little with day trips to both Monserrat mountain and Girona. Here is a breakdown of what I spent:

Of course this doesn’t include flights or any pre-trip expenses such as travel insurance.

I hope this guide has been useful, check out my Barcelona hostel guide to see my top 3 recommendations for solo travellers.