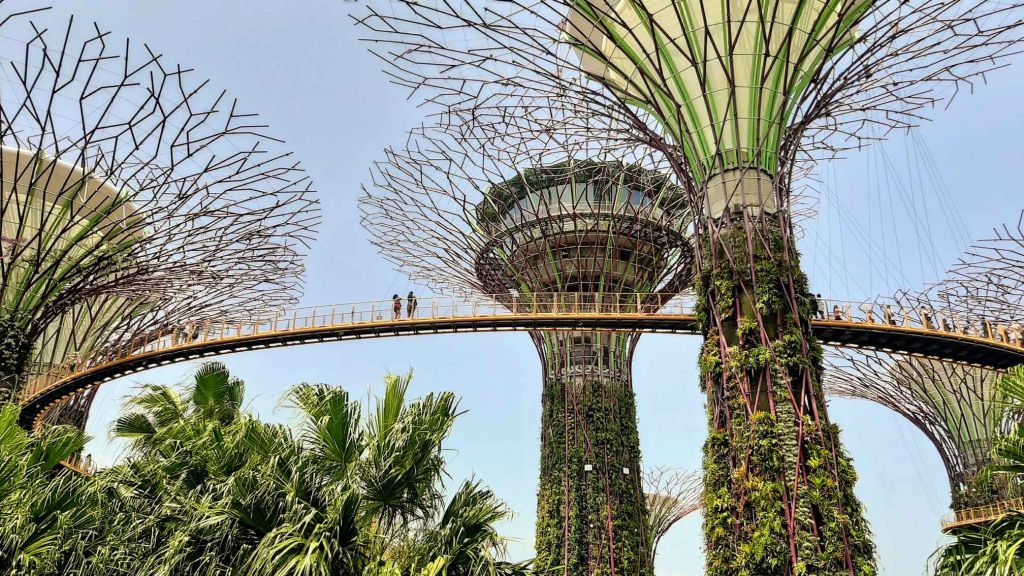 Singapore is not what I expected. Not at all. After backpacking through the rest of South East Asia, I was accustomed to messy, chaotic streets where you can literally taste the pollution. This was all part of the charm. Yet, I arrived in Singapore with disbelief. This modern, clean and forward thinking the city sitting at the southern tip of continental Asia would not be out of place in many western countries.

As a country, Singapore is relatively young having recently celebrated it’s 50th year of independence. But it’s roots extend well back in to Malaysian rule and colonialist times. It’s these roots that have been key to it’s success. Although very small (it could fit more than 400 times in to neighbouring Malaysia), the country has worked tirelessly to show that it can thrive under independence.

The wealth is impressive. Demonstrated by it’s skyline featuring over 80 skyscrapers in a variety of shapes and sizes. From Marina Bay Sands, where a 3 acre park sits atop the three main towers of the hotel/casino, to a theatre shaped like a Durian fruit.

What really caught my attention, was how sustainable Singapore is. For a city with just 5 million citizens, the city is clearly at the forefront of the green revolution. Solar panels, vertical garden with plants sprawling up them, rainwater collection and many parks, some even on top of buildings.

With lavish casinos and fancy restaurants, it’s possible to spend a huge amount whilst you’re in Singapore. But it’s also possible to have a reasonably priced visit if you seek out the right places to stay, eat and explore.

During my visit I spent on average SGD$60 per day, which equates to about £36 / €39 / US$43. This didn’t include transport to the airport which was an additional SGD$22 via Grab.

Where to Stay in Singapore on a Budget?

Hostels are a little different in Singapore as they attract a much wider audience than your typical backpacker crowd in the rest of South East Asia. The good ones also tend to get booked up quickly so it’s one of he few destinations where booking a few days ahead is definitely advised.

I can recommend The InnCrowd Backpackers hostel. They have a kitchen area which helps keep costs down, free breakfast and a free scooter tour all at a reasonable price for the city.

Within the central area of the city near the Singapore isn’t that big, I was able to explore most of it on foot. But there will likely be some times when you need to use public transport, the MRT and buses are super easy to use and reasonably priced.

Is it worth getting a Singapore tourist pass?

A Singapore tourist card allows unlimited travel for 1/2/3 days on the trams and buses for SGD$10/16/20 respectively. If you’ll be using the MRT a lot then this might be worthwhile but on my visit I tended to make between 2-4 journeys per day so a tourist pass would not be advisable.

Another option is to get an EZ link card. There is an SGD$5 non-refundable deposit, but as a result you get to take advantage of much cheaper fares. I wasn’t around for long enough to take full advantage of this card however I’d have saved over 45% on each SGD$1.50 fare.

If public transport isn’t for you, Singapore also has Grab, the Asian equivalent of Uber, which is usually much cheaper than regular taxis.

If you’re planning to head further afield to Malaysia and beyond, it’s not advisable to book through hostels as you’ll usually be booking a premium. Try booking on Easybook which provides reasonably priced bus travel in Malaysia and Singapore.

Eating and Drinking at the Hawker Centres

If you’re visiting a restaurant in Singapore, you can expect to pay prices similar to western standards. Luckily, there’s an abundance of cheap and delicious food available at the Hawker centres. These are open air food courts that offer a wide selection of cuisines, including Chinese, Indian, Western, Seafood and local dishes.

Unlike other countries in South East Asia, you can drink the tap water in Singapore so won’t need to keep buying bottled water – good for your pocket and the environment.

Singapore is a very strict country, that’s how it’s been such a financial success with so few citizens. As such, alcohol and cigarettes are heavily taxed making them very expensive compared to nearby countries. If you’re on a budget, you’re not going to want to go on any nights out in Singapore.

Singapore seems to have two extremes when it comes to tourist attractions, either completely free or quite pricey. Obviously this guide is going to focus on the free attractions but if you’ve more to splash out then there are plenty more things to do in Singapore.

Gardens by the Bay

Gardens by the bay is a huge 101 acre green area where nature and technology come together to create a stunning attraction.

It is free to enter the gardens and look around, you’ll be able to wander amongst the Supertrees that stand as tall as 50m. Not only do these trees look visually appealing and draw in tourists, but functionally they are very environmentally friendly, collecting rainwater, generating solar energy and providing air ventilation for the conservatories.

You can take a stroll along the 440m boardwalk by the dragonfly lake try spotting the many sculptures that are on display throughout the park. Some parts of the gardens do charge for entry including the flower dome, the cloud forest and the sky walk.

Each night there is a light show at 7.45 and 8.45 pm, the trees light up in time to music which is inspiring to watch.

At first, the strange half lion, half fish statue in the middle of Singapore might seem a little strange, but the ‘Merlion’ is an ode to the city’s humble beginnings. The fish is reminiscent of the original fishing village whilst the lion represents the original name, Singapura, meaning lion city.

The sculpture has been moved from it’s original location to the new Merlion Park. This is the perfect place to admire the city, with sweeping views across the bay towards the west and the incredible architecture that dominates the skyline towards the East.

Marina Bay Sands, the USD$8billion hotel and casino, has become synonymous with the skyline of Singapore. The three towers are a fantastic piece of architecture in themselves but the 3 acre park that spans across the top of them is something else.

Each evening, there is an impressive light show where the fountains and surrounding buildings light up with lasers and projections to orchestral music.

For the best view of the fountains, sit in front of the Louis Vuitton building or to get a fuller view of the lights, sit on the other side of the lake looking directly across at Marina Bay Sands. Show times are 8 pm and 9 pm each day with an additional 10 pm show on Fridays and Saturdays (check official website for changes).

Look out for many free events that are held throughout the city year round. Both the Esplanade theatre located by the bay and the botanic gardens hold fantastic concerts that are free to attend. I was lucky enough to visit Singapore during the Esplanades ‘Jazz in July’ event and was able to attend one of the performances which was really enjoyable. Also look out for the free outdoor movies that are frequently held across the city.

Here are the links to find out what events might be on during your visit:

Forts and Beaches of Sentosa Island

Sentosa island is home to many resorts including universal studios, SEA Aquarium, trick eye museum, etc, all of which come with a price tag. However, the island also boasts a number of attractions that you can see for free.

Visit the beaches of Sentosa by taking the free shuttle bus that journeys up and down the island or head to Fort Siloso where you can stroll across the sky walk and learn how Singapore defended its waters. Whilst not comparable to the beaches in the South of Thailand or Cambodia, it makes a nicec brief escape from the buzz of the city.

TIP: There is a tram from the mainland over to Sentosa with 3 different stops on the island. Taking the tram from the first stop on the mainland costs SGD$4 but if you walk across the bridge on foot you can use the tram service for free from all of the other stations.

Whilst on Sentosa island, I also took a visit to the ‘Southernmost Point in Continental Asia‘. The view wasn’t particularly special as the sea was filled with cargo ships, but after spending 4 months travelling through South East Asia,it was a nice sense of accomplishment to have reached the edge of the continent.

You’ve most likely come across Tiger Balm during your travels around Asia. This cure-anything cream was the creation of Chinese-Burmese brothers; Aw Boon Haw and Aw Boon Par.

Tiger Balm was a huge success, so armed with more than enough cash, one of the brothers purchased a villa and designed Haw Par Villa (also referred to as Tiger Balm Gardens) which is now free to visit. With thousands of statues, the gardens are heavily influenced by Chinese traditions and religions.

The most famous feature is a depiction of the Ten Courts Of Hell, based on the belief that wrong-doers are judged for their sins in the afterlife through ten courts. The tunnel is full of very graphic statues showing the punishments, each court has worsening punishments from being thrown in to volcanic pits to having your body dismembered.

This site uses Akismet to reduce spam. Learn how your comment data is processed.

Hi, I’m Kieren, a 26 year old from Wales with a love of exploring new places and making new friends along the way. I’ve interrailed through Europe and am currently solo backpacking across South East Asia but I still have a huge bucket list to get through. I plan to share my experiences and recommendations along the way. Read More.