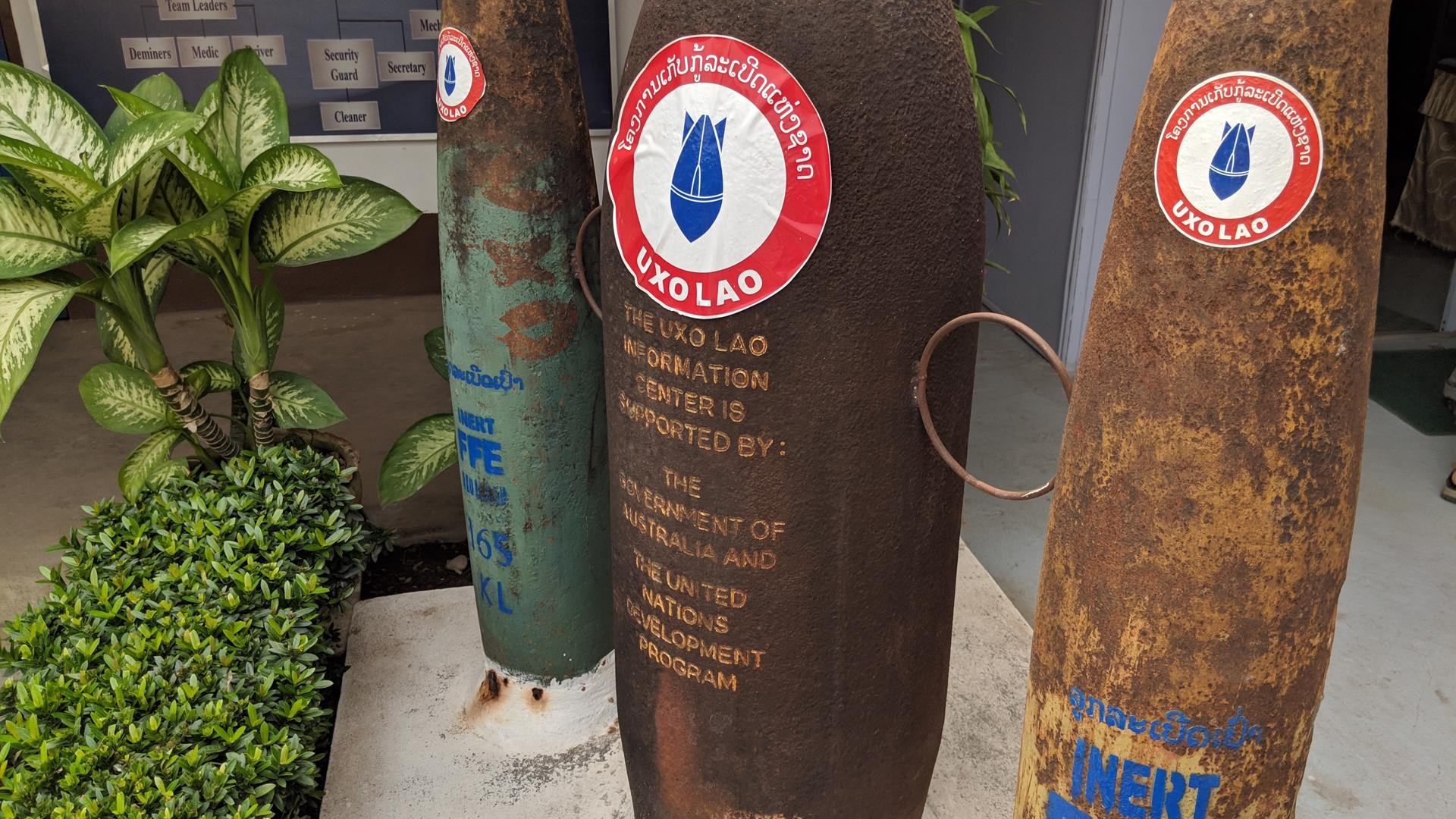 I had the pleasure of spending a few hours speaking with some Laos students who joined my table in a coffee shop in Vientiane. It was really interesting to learn some facts about Lao culture and hear their thoughts on the countries future.

This got me really interested to learn more about Laos so I’ve been researching the culture and history. Here are some of the facts about Laos you probably didn’t know.

Laos only has a population of 7 million

Vang Vieng is home to the ‘cheapest hot air balloon ride in the world’ at around $90 per person. Considering how beautiful the countryside surrounding Vang Vieng is, this is a bargain worth waking up at 4.30am for.

Whether being the ‘cheapest’ is something that entices you when it comes to choosing your hot air balloon provider is another thing.

The impact of the Vietnam war was severe on Laos, even until this day. Laos was secretly bombed by America for nine years during which hundreds of millions of bombs were dropped on the country and tens of thousands of people were killed.

However, there was such a high failure rate on the bombs that more than 80 million of the bombs did not explode on impact and today remain scattered across the countryside.

Every single day at least 1 person is killed or injured from these unexploded bombs in Laos, more than 40 years after the last bomb was dropped. Many of the victims are children, innocently picking them up whilst going about their daily business.

Public displays of affection are frowned upon

In Laos, it is frowned upon to display any form of affection in public. Even kissing, hugging or holding hands in public is a taboo.

Laos, land of a million elephants

The elephant is the national symbol of Laos due to the vast number of them that used to reside here. Laos used to be called Lane Xang which literally translates as the Land of a Million Elephants.

Unfortunately there aren’t that many around anymore due to wars, the destruction of their natural habitat and unethical practices.

Lao foot etiquette is quite specific

Each year the Lao National Tourist Authority publishes a reminder of the things to do and things to avoid in Laos. Most of these are expected such as dress appropriately, no public nudity and take your litter home.

But Lao culture is a little different when it comes to the feet. They should never be pointed at anyone, raised up on chairs or tables and you definitely shouldn’t touch anyone with them.

The landlocked country has 4000 islands

In the far south of the country you’ll find Si Phan Don which translates as the 4000 islands. It’s a section of the Mekong rover that divulges into many smaller waterways before reuniting just over the Cambodian border. The result is a huge number of islands, varying in size and shape.

Whilst there are only 3 main islands that are inhabited, according to legend there are over 4000 in total. The islands have become a popular spot for tourists due to the beauty that can be found on them.

All Lao boys are expected to become novice monks

A novice monk is a young boy between the age of 8 and 20 who commit to become a monk for at least 3 months. All boys in Laos are expected to spend some time as a monk during which time they will live in a monastery and adhere to strict rules.

A novice monk has only 10 preceps (rules) to follow, whereas a fully fledged monk has 227 preceps to follow.

For many children in Laos, becoming a monk is often the only way they will be able to access education. Some novice monks will stay beyond their initial 3 months for their entire childhood or even their entire life. Whilst it is an expectation to spend some time as a monk, in reality not all Lao boys will do this.

Every morning at sunrise, monks collect their daily meals from local people

Whilst in Luang Prabang, I witnessed the longstanding tradition of Alms giving. This is a daily Buddist ritual where the Lao people line the streets with offerings of rice, fruit and snacks for the 200 monks that reside in the city’s temples.

Lao people celebrate many festivals throughout the year

I was lucky enough to be in Laos for Pi Mai, or Lao New Year. Whilst Laos is normally a relaxed country, during the 3 day festival the streets come alive as locals and tourists gather water pistols and hose pipes to drench passers by. And I mean drench!

Shortly after Pi Mai is the Lao Rocket Festival. During this festival, monks and villagers build bamboo rockets which are fired in to the sky during the 6th lunar month. This is believed to bring the rain so that rice planting can begin. There are normally competitions to see whose rocket can go highest, with the losers or non-starters being thrown in to a mud bath.

The country’s national beer is part owned by Carlsberg

If you visit Laos, you’ll be familiar with Beer Lao, the country’s infamous beer with a 95% market share. Did you know, that The Lao Brewing Company who produce Beer Lao is a joint venture, half owned by the Lao Government and half by Carlsberg, the worlds 4th biggest brewer?

Landlocked but plenty of waterfalls and lakes.

Even though Laos is the only land locked country in South East Asia, you’ll never have to go far to find a stunning waterfall or lake.

In Luang Prabang is Kuang Si Falls, a popular waterfall due to the beautifully blue water that tumbles down in to various pools beneath.Then in the south of the country is Khone Phapheng Falls, commonly referred to as the largest waterfall in South East Asia due to it’s length of almost 10km.

In the late 19th century Laos became a French colony after the Siamese agreed to transfer power for all territory east of the Mekong to France. Independence was eventually granted for Laos in the mid 20th century but the traces of French colonialism are still visible today.

French bakeries are scattered throughout the cities, signs and street names often in French and buildings that would not look out of place in Paris. Not to mention the Patuxai Victory monument in Vientiane, built to remember those who died in WWII and the fight for independence but is actually reminiscent of the Arc de Triomphe in Paris.

The Mekong Irrawady dolphin will soon be extinct

Irrawady dolphins are a vulnerable species found in the south and south east of Asia with around 7,000 left globally today. There are eight subpopulations, one of which are found in the Mekong in Laos near the border with Cambodia.

One of the more worrying facts about Laos is that the sub population found in the country is almost at it’s end with only around 20 remaining. These creatures can grow up to 2.5m in length and generally live in groups of 6.

Despite being a relatively new industry, tourism is thriving in Laos

The tourist industry has only really taken off in Laos in the last two decades but now more than 4 million tourists visit the country each year and it had become the second biggest industry in the country just behind mining.

Despite this, it can still feel like some areas aren’t yet accustomed to tourists, particularly in the South of the country which is less frequently visited.

You cannot buy or sell the Lao currency outside of Laos

The Lao Kip is the legal currency in Laos. The Kip is a closed currency, it cannot be converted outside of Laos so you won’t be able to buy it before you arrive, nor will you be able to sell it once you leave.

Make sure you spend every penny or it will be decorating your wallet for a long time to come.

Laos is well know for it’s coffee production, in fact it’s the countries biggest agricultural export. The first coffee plants were bought to Laos by the French during the early 1900’s.

Most of the coffee comes from the Bolaven Plateau in the South of the country. The high altitude and rich mineral content left by a volcanic eruption millions of years earlier makes perfect growing conditions.

The minimum wage in Laos has rocketed in recent years which the country puts down to record increases in economic growth and a subsequent rise in living costs.