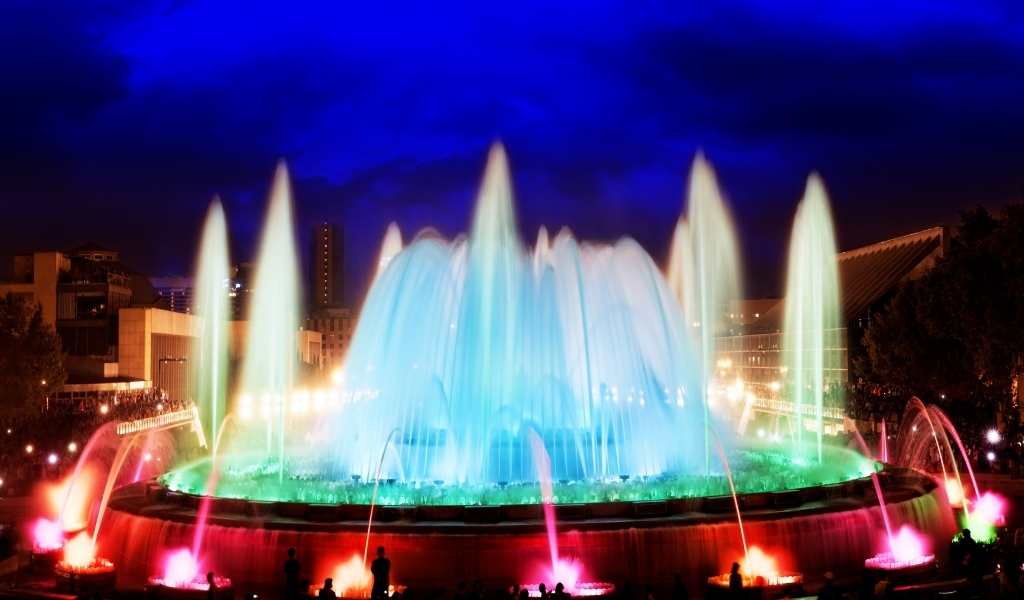 Font Màgica de Montjuïc (more commonly known as Montjuïc Fountain) is at the bottom of Montjuïc hill in Barcelona, just a short walk from Plaça España.

The fountain has become a symbol of Barcelona, known for its unique light, water and music shows that take place daily.

There are two shows every night, with each show lasting around 20 minutes. The show times vary by season so check the latest times on the Barcelona council website.

The fountain is 100% free to visit and always has been. For this reason, it’s always really busy, especially in peak times of the year. If you want to get a good spot to watch the show, make sure you arrive early.

Here are 11 facts about Montjuïc Fountain that you might not have known:

1. The fountain sprays 700 gallons of water a second

Made from tiered pools of water, Montjuïc fountain has 3620 jets which blast a combined 700 gallons (2,600 litres) of water per second to create its effect.

2. It was designed for the 1929 Universal Exhibition by the engineer Carles Buïgas

Montjuïc fountain was designed by Carles Buïgas who also designed the towers of the Port Vell Aerial Tramway in Barcelona.

The first performance took place on 19th May 1929 at the Universal Exhibition, an arts and technology event attended by 20 countries.

3. There was originally a different landmark on the site of the fountain

The site where Montjuïc fountain now stands was previously the site of the Four Columns Monument.

This was built in 1919 by Spanish architect Josep Puig i Cadafalch. It was a much-loved monument by locals so there was outcry when they were destroyed by the dictator Primo de Rivera as he sought to remove all Catalonian symbols from the city.

A replica of the original monument was erected near the fountain in 2010.

Designs were submitted just a year before the first performance was due to take place.

The proposal by Buïgas  was so extravagant that many thought it was too ambitious and would not be built in time.

In order to achieve the deadline, over 3,000 workers were involved in construction. It was completed on time but was only inaugurated the day before the first performance.

The three concentric pools of water hold a total of 3.1 million litres of water, that’s more than an Olympic sized swimming pool.

Since the water emergency of the 2008 drought, the fountain has been recirculating water and since 2010 it’s been using groundwater.

A little known fact about Montjuïc fountain is that the music wasn’t part of the initial design. It was just a light and water show.

However, in 1980, over 50 years after it was first built, the element of music was added with the lights and water jets appearing to dance to the music.

The music is a selection of classic songs, pop songs and music from film or children’s TV shows. The music choices are regularly updated. You can watch some of the latest choreographies here.

One song that was originally featured and continues to be included in the playlist to this day is ‘Barcelona’ by Freddie Mercury.

7. There are 7 billion light-and-water combinations

The fountain combines hydraulic water jets and coloured lighting effects to appear as if it is dancing.

8. The fountain is being updated with more sustainable technology

Over the years, the old lighting in the fountain has been replaced with LED lights which are known for their low energy consumption and long life.

In further efforts to save energy, the number of show times were cut in 2016.

This puts it as the third most popular tourist attraction in Barcelona, behind the Sagrada Familia (4.7m) and Park Güell (3.2m) and ahead of FC Barcelona museum (1.7m).

This is just an estimate, the fountain is not ticketed so the real number will be impossible to know.

10. The fountain was out of action for two decades after damage from the Spanish Civil War

During the Spanish Civil War of the late 30’s, Montjuïc Fountain suffered immense damage and was put out of operation.

It wasn’t until restorations in 1955 that the fountain was up and running again.

The restorations were undertaken by Buïgas, the original designer of the fountain.

Both the 1992 Olympic Games and 2002 MTV Music Awards were huge events held on Montjuïc Hill.

The fountain was restored ahead of the Olympic Games and played a key role in both events.

Backpacking Spain as a Solo Traveller

The Complete List of Game of Thrones Filming Locations in Girona, Spain