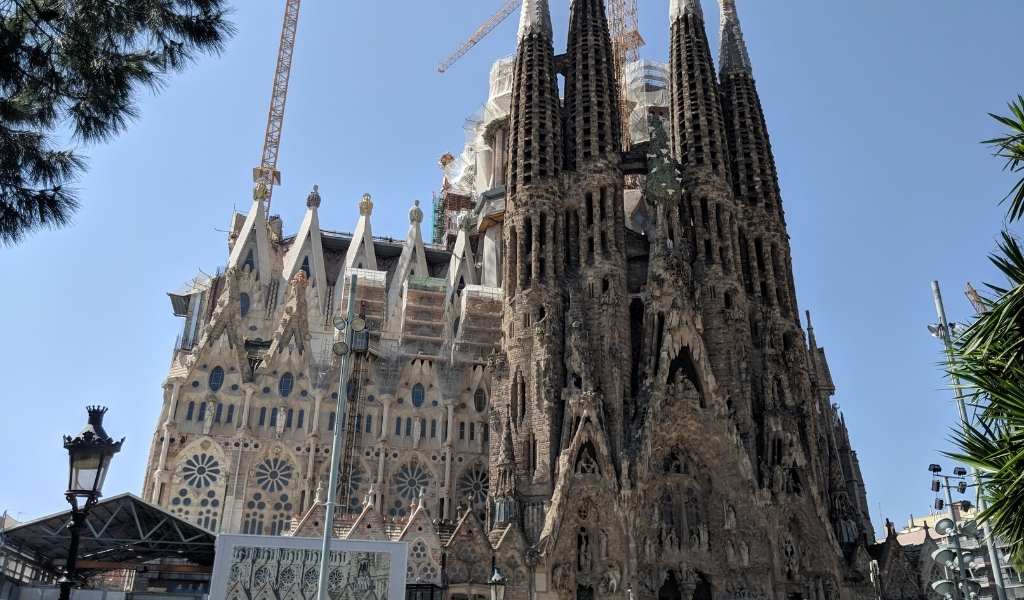 The Sagrada Familia is one Barcelona’s best known features and the pièce de résistance of Spanish architect Antoni Gaudi.

Having visited Barcelona on numerous occasions, I’ve seen my fair share of the basilica. It’s amazing to look at both inside and out, but it’s only when you learn more about its history that you really appreciate the magnitude of the project.

I’ve pulled together these 21 facts about the Sagrada Familia that will give you an interesting insight in to this gem.

1. It’s been in the making for almost 140 years, and still isn’t complete

If there’s one thing you need to know, it’s that the building has taken a VERY long time. Construction of the Sagrada Familia first began on 19th March 1882 and still ongoing to this day.

Latest estimates expect that the building will be complete by 2026, meaning it will have taken 144 years to complete. By contrast, the Taj Mahal took 21 years and St Peter’s Basilica in the Vatican City took 120 years.

2. The Sagrada Familia was inspired by a visit to the Vatican

The church was first envisioned by Josep Maria Bocabella, a bookseller from Barcelona who had visited the Vatican in 1872 and been inspired by the Basilica della Santa Casa in Lorreto.

3. It was originally intended as a church, but later declared a basilica

The building had always been designed to be as large as a cathedral, but as it was never going to be run by a bishop, it would always be known as a church.

However, in 2010 the building was consecrated by the Pope which gives it the status of a basilica minor.

The Sagrada Familia will have 18 towers when complete. The tallest tower in the middle (172.5m) will be topped with a cross and represents Jesus, the second tallest (138m) represents Mary and will have a morning star on top.

There are then 4 towers to represent the four evangelists, Matthew, Mark, Luke, and John. The final 12 towers represent the apostles.

5. In the early days, there was a school on the site

The Sagrada Familia Schools Building was opened by Gaudi in 1909 on the site of the basilica. It was mainly for the children of construction workers but also for children from the surrounding neighbourhoods who were mainly from poorer backgrounds.

In 2002 the building had to be relocated to make room for the actual building and now sits on the southern corner of the site housing an exhibition.

The original church design was by architect Francisco de Paula del Villar. However, Villar had disagreements with one of the project’s advisory architects, so ended up resigning in 1883 after only the crypt had been built.

The job was then offered to Joan Martorell (the adviser with whom Villar had disagreed) but he turned it down.

Gaudi, who had already worked on some Spain’s most famous places at this point, was finally bought in and would lead the project for the next 43 years.

7. Gaudi redesigned the building with inspiration from the bible and nature

When Gaudi took over the project from Villar, he significantly changed the buildings design, both structurally and decoratively. He eliminated the main staircase and replacing it with spiral staircases, opening up the main floor space.

The project had always been large in scale, but Gaudi took that to the extreme, creating a design with five naves (central areas), twelve bell towers and three façades. Gaudi wanted it to be a like a huge stone bible, telling the stories of Jesus and the Christian faith.

The design was also very Gaudi-esque in design, taking many cues from nature. He eliminated any unnatural straight lines. Inside, the columns were designed to look like trees to give the alure of being deep int eh forest.

8. The building receives 4.7 million visitors per year, but most don’t go inside

If you’ve ever visited the Sagrada Familia, you won’t be surprised to hear that it’s the most visited tourist attraction in Spain, attracting 4.7 million visitors in 2019. It’s always incredibly busy in the surrounding area with huge queues for tickets.

A study of the visitors found that only 24% were foreign tourists, with the rest flocking from across Spain. The study also found that 80% of those who visit, don’t go inside which seems a shame to me as the inside is just as amazing.

9. Gaudi is buried in the crypt

Despite dedicating the latter part of his life to the project, Gaudi died long before the building was complete. He was injured by a passing tram as he made his daily commute to the church.

It’s estimated that only 15-25% of the building was complete at the time of his death. He was buried in the crypt of the Sagrada Familia two days later. The only other person to be buried in the building is Josep Maria Bocabella, the bookseller who originally came up with the idea.

10. The plans were bombed in the Spanish Civil War

During the Spanish Civil War in 1936, parts of the building were destroyed, but an even bigger blow was when the workshop was destroyed containing Gaudi’s models.

Of course, this was many years after Gaudi’s death, so it wasn’t as simple as asking him to recreate them. The building is now based on reconstructions of Gaudi’s design.

11. Some of the stone for the bell towers comes from the UK

Gaudi’s original intention had been to use the stone from nearby Montjuïc for the building, however these quarries eventually became exhausted, so the builders had to look elsewhere.

They eventually settled on sandstone from Brinscall Quarry, near Chorley in the North of England as a suitable replacement.

Once the giant cross has been added to the top, the height of the building will be 172.5m.

A little-known fact is that this height was specifically chosen by Gaudi as he wanted it to be taller than all of the other buildings in the city, but not taller than nearby hill Montjuïc (184.8m tall). Gaudi did not think that his creation should be taller than Gods.

13. It will be the tallest church in the world

Once complete, the Sagrada Familia will become the tallest church in the world, knocking Germany’s 162m high Ulm Cathedral off the top spot.

14. On the exterior, there are 3 façades (faces), each representing a stage in Jesus life

There are three main façades that depict stories through the stone. These are called the nativity, passion and glory façades.

The nativity façade was the first one to be built, dedicated to the birth of Jesus and the creation of life.

Next was the passion façade, dedicated to Jesus’ crucifixion and human sin.

Finally, the glory façade is the largest of them all, this depicts the glory of Jesus and the pathway to God. It will also depict purgatory, death and hell.

15. The Sagrada Familia did not have a building permit for the first 137 years of construction

This is one of my favourite facts about the building. Records show that a building permit was requested by Gaudi in 1885 but there is no record of it ever being officially granted. It wasn’t until June 2019, 137 years since the first stone was laid, that the city finally responded.

16. The ongoing construction is paid for entirely by donations and tourism

With the ongoing construction works, it is estimated that the building requires €25 million of funding each year, this is paid for entirely by donations and tourism with no support from the local council, government or official church sources.

Tickets range from €20 for basic entry up to €40+ for guided tours or visiting the towers.

17. The only way up the towers is in an elevator

Each of the completed façades has towers which are open to visitors. There are no stairs however, so you’ll be taken up in a glass elevator.

The  façades are not connected so you will have to choose between them or visit each separately. The Nativity façade looks out to the sea, whereas the passion façade has views towards the city centre.

A visit to the towers is not included in the basic ticket, you will have to purchase a tower ticket for an extra cost.

18. Only part of the basilica is a UNESCO heritage site

19. Not everyone is a fan of the building

The building has attracted its fair share of criticism. George Orwell, a recognised British novelist, said it was “one of the most hideous buildings in the world”, whilst Enric Massip, an architect who advises the City of Barcelona, described the building as “an artificially inflated space lacking in soul”.

It’s not just prominent figures who have spoken out, there has been local opposition to the ever-expanding reach of the building.

In 1953, a group of prominent architects demanded an end to any further expansion whilst more recently in 2019, local residents and businesses contested i’s legitimacy as construction expanded to take over a neighbouring street.

20. There are two sculptures of Gaudi on the building

It’s not just religious figures and symbols embodied in the stone carvings of the building.

You’ll also find the faces of many other citizens and builders that worked on the church embedded in the stone, including Gaudi himself. However, I’m yet to actually spot these figures so I’d love someone to point them out.

21. 3D printing has played a key role in modern design

For most of it’s life, the construction of the building relied on handcrafted prototype models of each section before going on to build them for real. However, in 2001 the project started using 3D printing to speed up the process.

I hope you’ve found these Sagrada Familia facts interesting, if you have any more of your own I’d love to hear them and add them to the list.