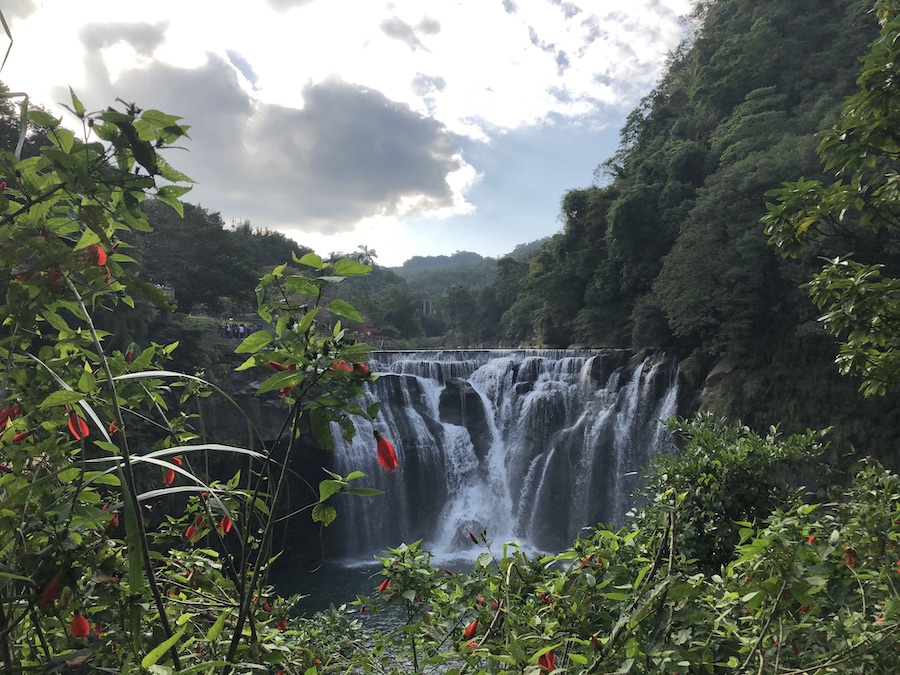 Shifen Waterfall often also referred to as the ‘Little Niagara of Taiwan’ is not just the most beautiful waterfall in Taiwan but one of the most attractive in all of Asia.

Surrounded by the verdant forests and scenery of the Pingxi district in the north east of the island a visit to Shifen Waterfall makes for a truly fabulous day trip away from the hustle and bustle of modern Taipei.

Lying on the Keelung River Shifen Waterfall is a curtain style waterfall with a constant and abundant sheet of fresh water originating in the mountains outside of Jingtong.

On the right day when the sunshine hits the large cloud of mist above the waterfall visitors will be treated to a rich rainbow.

To help you make the most of your own visit here is our guide to visiting Shifen Waterfall.

Where is Shifen Waterfall?

Shifen Waterfall is situated one kilometre north east of the village of Shifen in the Pingxi District of north eastern Taiwan. The capital city Taipei lies approximately 35 km to the west.

A popular day trip from Taipei, it is possible to reach Shifen Waterfall by road in approximately one hour. However travelling by Taiwan’s
incredibly efficient rail network is undoubtedly the best way to reach Shifen to enjoy both the waterfall and the surrounding attractions of the Old Town.

Taipei Main Station lies on both the blue and red lines of the city’s MRT system. From there trains to Ruifang Station leave every 30 minutes and take 50 minutes. Change there to Platform 3 for a local Pingxi line service to Shifen.

Do plan ahead though as connecting trains to Shifen are not as frequent leaving approximately every hour. These small local trains are often busy during high season and travellers may need to stand.

Separate tickets will need to be purchased for the two services with total cost in the region of around 150 New Taiwanese Dollars equivalent to £4.00 or $5.00.

From Shifen Old Town the waterfall is a simple 15 minute walk along the train track and river.

When Did We Visit?

Our own day trip from Taipei to Shifen Waterfall occurred out of high season in the autumn of 2019.

We managed to find a seat on the local train from Ruifang to Shifen and adored the slow journey through the autumnal bronze and ambers of the surrounding forests. The sun shone all day and helped make our own trip to Shifen Waterfall a truly fantastic day out.

At first the thought of a 20 minute walk from the train station may sound a step too far. However, this should be considered to be part of the experience.

Walking across and below suspension bridges along the Keeling River and through the rural Taiwan landscape provides a moment to savour. As much as I love cities time away from them to renergise is always welcome.

On arrival the perimeter walkway together with the several viewpoints is incredibly well signposted and impossible to miss. Take your time to visit each viewpoint and marvel at the different perspectives on offer.

As you take in the natural power of the waterfall surrounded by the lush forest and seasonal colours you are truly transported to decades and even centuries past away from today’s modernity.

The prime spot and best for those perfect photographs is directly opposite at the furthest point away from the entrance. At 20 metres tall and 40 metres wide Shifen may be just a fraction of Niagara but this does by no means take away from its majesty.

For the rest of the year the Waterfall is still open from 09.00 each day but instead closes an hour earlier at 17.00.

The cost of an adult entrance ticket to Shifen Waterfall is just 80 Taiwanese Dollars equivalent to £2.00 or $2.75. Unbelievable value for money!

Things To Do Near Shifen

Shifen Old Street is a destination in its own right. Similar to the more famous ‘train street’ in Bangkok or Vietnam the train track runs through the middle of the village just inches from decades old buildings flanking each side.

No doubt you’ll want to join the throng of fellow tourists in the search for that iconic photo as the train approaches.

Held in February of each year Shifen plays host to the Chinese Lantern Festival. However, you don’t need to arrange your trip to coincide with this celebration in order to release your own.

Shifen is now synonymous with releasing a lantern in order to bring you good fortune in various aspects of your life. Whilst the act of writing your own message on a lantern and releasing it is a hugely touristic pastime the sight of them disappearing in to the distance is still a joyous and optimistic experience. Releasing one at dusk or night is also tremendously romantic as the sky fills with silent flames.

Lanterns come in four colours, each denoting a particular wish and will cost in the region of 150 TD to release your own.

Anyone who has enjoyed a trip to Taiwan will already appreciate how important street food is to it identity and daily life. Street food stalls line seemingly every road throughout the country. A true celebration of the joy of simple but delicious cuisine, often original and unlike any you’ll find anywhere else in Asia.

Shifen Old Town is no different. Why not pick up your own tasty morsel as you watch mesmerised at the many lanterns or while you wait for the next train to trundle inches from your face.

Personal tips include any of the fried chicken on offer but particularly the cutlet. Similar to a schnitzel but thicker and still on the bone these are delicious with an accompanying sauce. Alternatively try a pork dumpling or countless sausage options perhaps washed down with Taiwan’s very own Bubble Tea.

Taipei is a dynamic and fascinating city to visit and explore. However, you simply must take the time to enjoy a day trip outside of the city and there is nowhere better than Shifen Waterfall.

A splendid natural phenomenon surrounded by the beautiful Taiwanese landscape would suffice. Add the drama of Shifen Old Town, the romance of the lantern ceremonies and yet more street food and you have the recipe for the perfect day out.

5 Places to Visit in December – As Told by Travel Bloggers

Paul is a British travel blogger from Birmingham and writes about his adventures over at The Two That Do. He's a particular fan of visiting Asia, with Japan and Hong Kong among his favourite places.