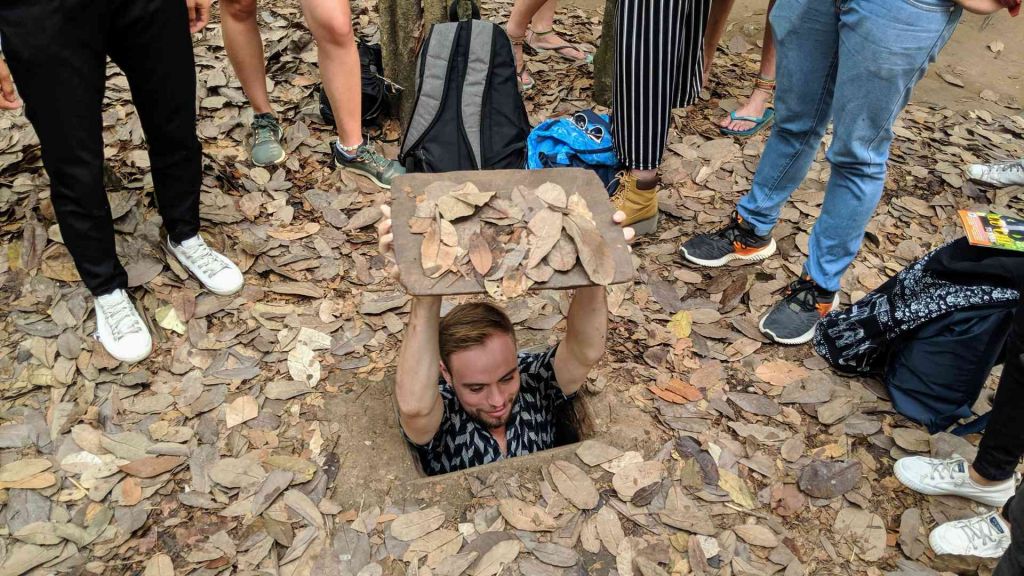 Ho Chi Minh City (HCMC) is Vietnam’s biggest city and with as many motorbikes as people, it can sometimes feel a little crazy.

Most locals still refer to the city as Saigon, it’s original name before being renamed after the former politician, Ho Chi Minh, who lead Vietnam to independence during the Vietnamese war against american forces.

I recommend at least 3 days in Ho Chi Minh, I stayed for a week and still found new and exciting things to do, here is my guide to travelling the city alone.

Yes, overall Vietnam is very safe for solo travellers and this includes Ho Chi Minh City. It is very unlikely that you’ll find yourself in any serious danger in the city. However, here are a few things to look out for:

If you’re travelling solo, you’ll likely want to stay in a hostel to meet other solo travellers.

The most popular district in Ho Chi Minh City for backpackers is Pham Ngu Lao (in district 1) where you’ll find an abundance of places to stay alongside cheap food and with close proximity to the nightlife.

Here are a few places that I recommend:

RELATED: Guide to the Best Hostels for Solo Travellers in Ho Chi Minh

RELATED: How to Make Friends Whilst Travelling Solo

Things To Do in Ho Chi Minh City by Yourself

Used by the Viet Cong during the war, this network of tunnels under the Cu Chi district were dug by hand and contributed to the success of northern communist forces. As well as hiding from the Americans, these tunnels provided vital supplies of weapons, ammunition and food to rebel forces in the south as well as important communications.

On a guided visit to the tunnels from Ho Chi Minh City, you’ll learn about their importance and have the opportunity to try one out for yourself (albeit a recreation big enough for tourists).

With close proximity to the Mekong Delta, a day trip here should be on your Ho Chi Minh itinerary. On a typical day trip to the Mekong Delta you’ll experience life on the canals, see a coconut candy factory (and taste freshly made samples) and a bee farm.

Whilst it’s possible to craft a DIY tour to the Mekong Delta, if you’re travelling alone in Saigon, then a group tour can be a great way to meet others.

The Independence Palace, or Reunification Palace, was the headquarters for the General Ngo Dinh Diem who lead Southern Vietnam during the Vietnam War.

Today, it’s open as a museum with many of the rooms still in tact as they were when the war ended and communist tanks smashed through the front gates in 1975.

You can see the war bunker, tunnels, living quarters, an in-house casino and a number of tanks and a helicopter that were left behind.

If the Vietnam war interests you in the slightest, then a trip to the War Remnants Museum is in order. Outside the museum you’ll see some of the American weapons used in the war including tanks, fighter jets and helicopters.

Inside the exhibits bring to live the effects of the war on the country with some graphic stories and images. In particular, I was taken aback by the exhibit showing some of the final pictures taken by journalists before their untimely deaths.

Cafe Apartment no.42 , just off the city’s main Nguyen Hue Walking Street is an interesting concept. It’s a former residentual block of flats that has been turned in to a functioning array of shops and cafes.

In a truly unique design, it still very much retains the feel and layout of a block of flats with staircase and balconies included.

Everyone will have their own preferences of things to see whilst travelling, these are the attractions I personally didn’t enjoy that much.

Saigon post office is often listed as one of the top things to do in Ho Chi Minh City, but I didn’t really rate it.

If you’re hugely interested in architecture then you might appreciate it as a good example of French colonial architecture, with some rumours that the original design was by Gustave Eiffel (of Eiffel tower fame).

However, for the most part it’s a tourist trap through and through as it’s mainly filled with souvenir stalls.

Perhaps I should have done a little more research before visiting the turtle lake in Ho Chi Minh. What I found was a turtle-less concrete lake in the middle of a roundabout.

Even calling it a ‘lake’ is a little ambitious as it’s not that big. I’m told that the street food in this area is great in the evening but apart from this I wouldn’t bother with the ‘lake’.

I hope you’ve found this post useful and that you enjoy visiting Ho Chi Minh City!

Things to do Alone at Night in Ho Chi Minh City

Located in district 1, Bến Thành Market is one of the oldest and biggest markets in the city. This is where you’ll come to find some bargain price items and with everything from clothing to kitchenware, you’ll definitely find whatever you need here.

Be prepared for some hard negotiation as they will try to overcharge tourists, in most cases items I would aim for about 40% of the original asking price.

My favourite part of mrket wasn’t the stalls, but the Bến Thành street food court. Here you’ll find a range of Vietnamese and international foods including taco’s, kebab, curry, pizza and more. It’s called a ‘street food market’ but this isn’t the authentic street food you’d expect from Asia and is much more like a food court or restaurant.

Originating in northern Vietnam, water puppetry is a centuries old tradition that is a must see on any trip to the country.

Head to the Golden Dragon Water Puppet Theatre to see nightly shows. Given that the shows are in Vietnamese, you might not get the full story but it’s a sight worth seeing anyway.

Bui Vien Street is the central place to go for nightlife and is frequented by many backpackers. Expect cheap beer, loud music and enough laughing gas balloons to last you a lifetime.

As long as you’re weary of your belongings this area is perfectly safe. But, if you’d rather not head out alone, many of the hostels in HCMC run organised pub crawls that you can join even if you’re not staying there. Two you can try are The Hideout and VBH.

These are my solo travel tips for Ho Chi Minh City, although they could apply anywhere:

The 4 BEST Hostels in Hanoi for Solo Travellers (March 2020)