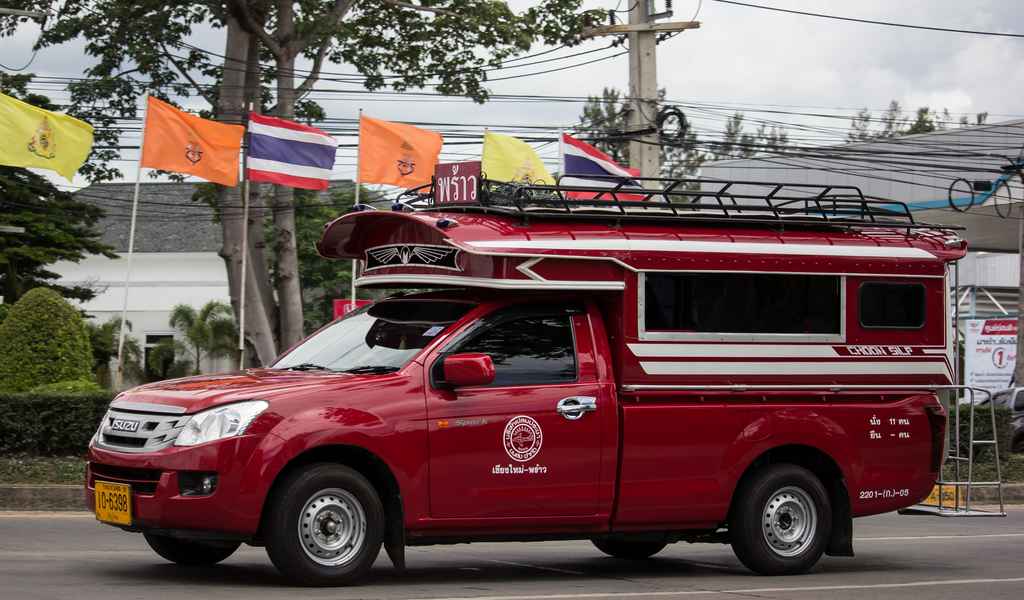 If you’re wondering what those red trucks are driving around Chiang Mai that pick up and drop off locals and visitors, they are they city’s answer to public transport, a Chiang Mai Songthaew.

These are converted red trucks that travel around the city picking up and dropping off passengers wherever they should like. They’re similar to a taxi as they’ll drop you off at specific destinations, but you’ll have to share it with other members of the public.

Songthaew literally means ‘two rows’ which is reference to the two rows of seats in the back of the trucks. The trucks should hold about 10 people (5 on each side) but I’ve seen them crammed with adults and kids on the floor and additional passengers hanging off the back. Songthaews may also be referred to as ‘Rod Daeng’ by locals which translates as red car.

In this guide I’ll teach you how to use a Songthaew in Chiang Mai and give you some tips to make the journey as seamless as possible.

How to Use a Chiang Mai Songthaew

To use a Chiang Mai Songthaew, simply hail one down and tell the driver where you’re going. If he says yes, hop in the back or if he says no wait for the next one as he’s probably not going in your direction. There is no need to discuss price at this point as you’ll end up with an inflated tourist price. Once you arrive, go to the front window and pay the amount he asks for.

How Much Does a Songthaew Cost in Chiang Mai?

The price of a Songthaew in Chiang Mai will be between 20-40 baht per person within the walls of the old city or more outside. If you’re not leaving Chiang Mai, the price should never be above 100 baht.

Booking a Songthaew with Grab

Those who have travelled extensively in Thailand or neighbouring countries will be familiar with Grab. This is a ride-hailing app similar to Uber for Southeast Asia and allows you to arrange a taxi from your current location using your smartphone. Its particularly good as it shows you the fare up front before booking which is always cheaper than the price you’ll get from hailing down a taxi or tuk on the road.

Grab top tip: sometimes I check the fare on Grab and show a nearby tuk to get a similar price.

In Chiang Mai you can use Grab to book Songthaews, simply select ‘Grab Rod Daeng’ when choosing your ride and enter your route details to get picked up. In my experience Grab still doesn’t allow automatic payments in Thailand so you’ll pay for the journey in cash at the end as usual, only you’ll know in advance how much the fare will be which is helpful for finding the right change.

The Songthaews have no fixed route and don’t operate on a first come first serve basis so you never know how long it will take. A simple 5 minute journey could easily take 20 minutes or more by the time you’ve made all the stops. The moral of the story is this, if you’re in a rush – don’t use a songthaew.

Getting Off a Songthaew

The driver will remember where you asked to get off but in some cases the language barriers can be an issue or they may forget so I recommend using a GPS app such as google maps to keep an eye on where you are. If you need to get off urgently for any reason, just knock on the cabin window and signal the driver to stop.

I recommend having small change to hand and try to pay in the exact change. Sometimes you may be short-changed by accident and occasionally on purpose.

You’ll mainly come across red Songthaews on your visit to Chiang Mai but occasionally you’ll spot others roaming around. Each colour has a different purpose, here are some of the main Chiang Mai Songthaew routes:

This isn’t an exhaustive list and there are also Songthaews used privately by tour agencies and hotels to transport guests so there are no hard and fast rules.

How to Get to Popular Tourist Attractions by Songthaew

How to get to Doi Suthep by Songthaew

To get to Doi Suthep by Songthaew, catch one of the Red Songthaews that pick up from outside Chang Phuek Gate (the north gate) or Chiang Mai Zoo. Return trip is 80 baht and the driver will allow you 1-2 hours at the temple before returning (ask the exact return time to make sure you don’t miss it). You’ll pay for the journey on the return trip.

The Songthaews for journeys like this only run when they are full so you may have a considerable wait at non-peak times or in low season. If you are struggling to fill a Songthaew at Chang Phuek Gate, try heading to the Chiang Mai Zoo stop as this is sometimes more popular. One way trips are also possible for 50 baht each way, but you’ll be relying on finding a space in another Songthaew for the return journey.

This runs every hour or so from 8.30am-6pm, costing around 60 baht per person to the springs and taking about 1.5 hours. This is a very local experience, so you’ll likely be packed tightly in the truck. Unlike the previous example, this Songthaew doesn’t wait to take you back as it’s a scheduled route. You’ll have to catch a return journey in the opposite direction once you’re done.

17 BEST Things To Do in Chiang Rai

How to Spend 3 Days in Bangkok on a Budget