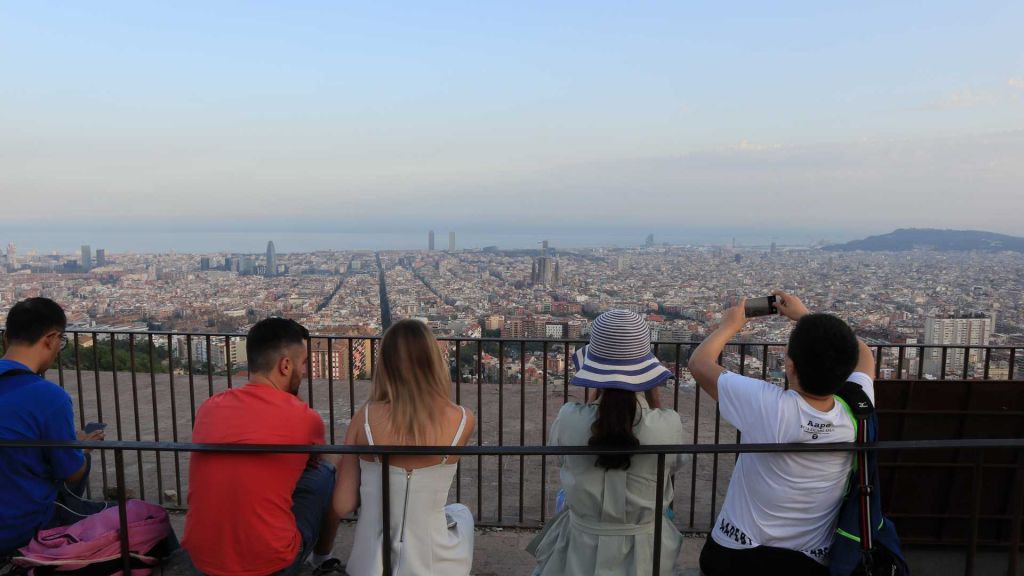 With a panoramic view across the city, Bunkers Del Carmel (also known as Barcelona Bunkers) is easily the best spot to enjoy the sunset in Barcelona.

The bunkers sit at the top of Turó de la Rovira hill allowing you to spot all the major features, from the Sagrada Familia right back to the W hotel that sits on the coast.

These military bunkers date back to the Spanish civil war when they were used as part of the city’s defence against airstrikes.

The anti-aircraft guns are no longer here, in their place is a small museum to educate the public about the civil war and particularly the role of Bunkers Del Carmel in keeping the city safe.

Once the Spanish civil war was over in 1939, the bunkers were no longer required to defend the city and fell into disuse. But, with rising poverty in the city, it wasn’t long before they were used to provide housing and shelter for the homeless.

A few decades later and the Barcelona bunkers had become a full blown shanty town known as cannons neighbourhood, housing up to 3,000 people at it’s peak.

This lasted until the 1990’s when Barcelona hosted the 1992 Olympic games.

In the years preceding, there was a facilitated effort to clean up the city which saw residents of the cannons neighbourhood rehoused elsewhere.

The bunkers again fell in to disuse until a project in 2011 saw them renovated and the Turó de la Rovira heritage space officially opened to shed light on the civil war which Spain is famous for.

The Bunkers Del Carmel can be found on Turó de la Rovira hill in the El Carmel district.

It’s about a 20 minute walk to Bunkers Del Carmel from Park Guell so many visitors choose to combine the two. The view is much nicer from the bunkers so I’d recommend visiting Park Guell late afternoon then head to the Bunkers for sunset.

It is possible to visit Bunkers Del Carmel by car, you can park along Carrer de Labernia or neighbouring streets which are right near the bunkers so you’ll avoid most of the uphill walking (although in my opinion, the walk is a nicer way to visit!).

You can visit Bunkers Del Carmel 24 hours a day for stunning views across Barcelona, there is no fee to visit.

Inside the Spanish Civil War Museum

The bunkers now belong to Barcelona City Museum of History (MUHBA), they were responsible for the renovation which concluded in 2011.

As part of this, one of the bunkers has been turned into a small museum with history about the Spanish war and the role the bunkers played in it. Entry to this is also free of charge.

It’s best to visit the bunkers during the golden hour, just before sunset.

This is when the area comes alive as locals and tourists gather to socialise, drink beer, play music and watch the sun disappear behind Barcelona, it’s definitely the best place in the city to watch sunset.

Don’t turn up right at sunset and expect to get a good spot as it will be super busy, try to arrive about 30-60 minutes before sunset to make the most of it.

If you’re looking to avoid the crowds, the 360 view makes the experience just as pleasant at sunrise, but you’ll have to get up early to catch it.

A sunset is always made better with a beer and this is no exception. Public drinking is commonplace at the bunkers and there’s usually a vendor around selling food and drink at fairly reasonable prices if you’re running low. Don’t forget drinking water for the journey too.

Although the bunkers sat empty for many years, it is fast becoming a tourist hot spot. Authorities are actually encouraging tourists to visit the bunkers to relieve pressure on the more traditional tourist attractions in the city.

Wear Trainers and Bring a Jacket

If you’re planning to take the scenic walk up to Bunkers Del Carmel, you’ll want to wear trainers for the journey. Although Barcelona tends to be a warm city, the bunkers are at the top of the hill and exposed 360 degrees so it can get windy, bring a coat for the journey back down after sunset.

Combine Your Visit with Park Güell

Park Güell is another top attraction in Barcelona and isn’t too far from the bunkers. It’s a large park that’s best known for the monumental zone which contains sculptures by Gaudi.

In my Barcelona itinerary, I recommend combining the two together by first visiting Park Güell in the afternoon, then making your way across to the bunkers for sunset.

There is no public transport between them, however the walk only takes about 25 minutes and isn’t too strenuous. You can always grab a taxi outside Park Güell if needed.

If you’re looking for a restaurant after visiting the bunkers, check out Restaurante Delicias, great food and drink and the Patatas Bravas are exquisite.

Find the best hostels in Barcelona for solo travellers with my insiders guide.

What is Spain Famous For? [24 Things It’s Known For]