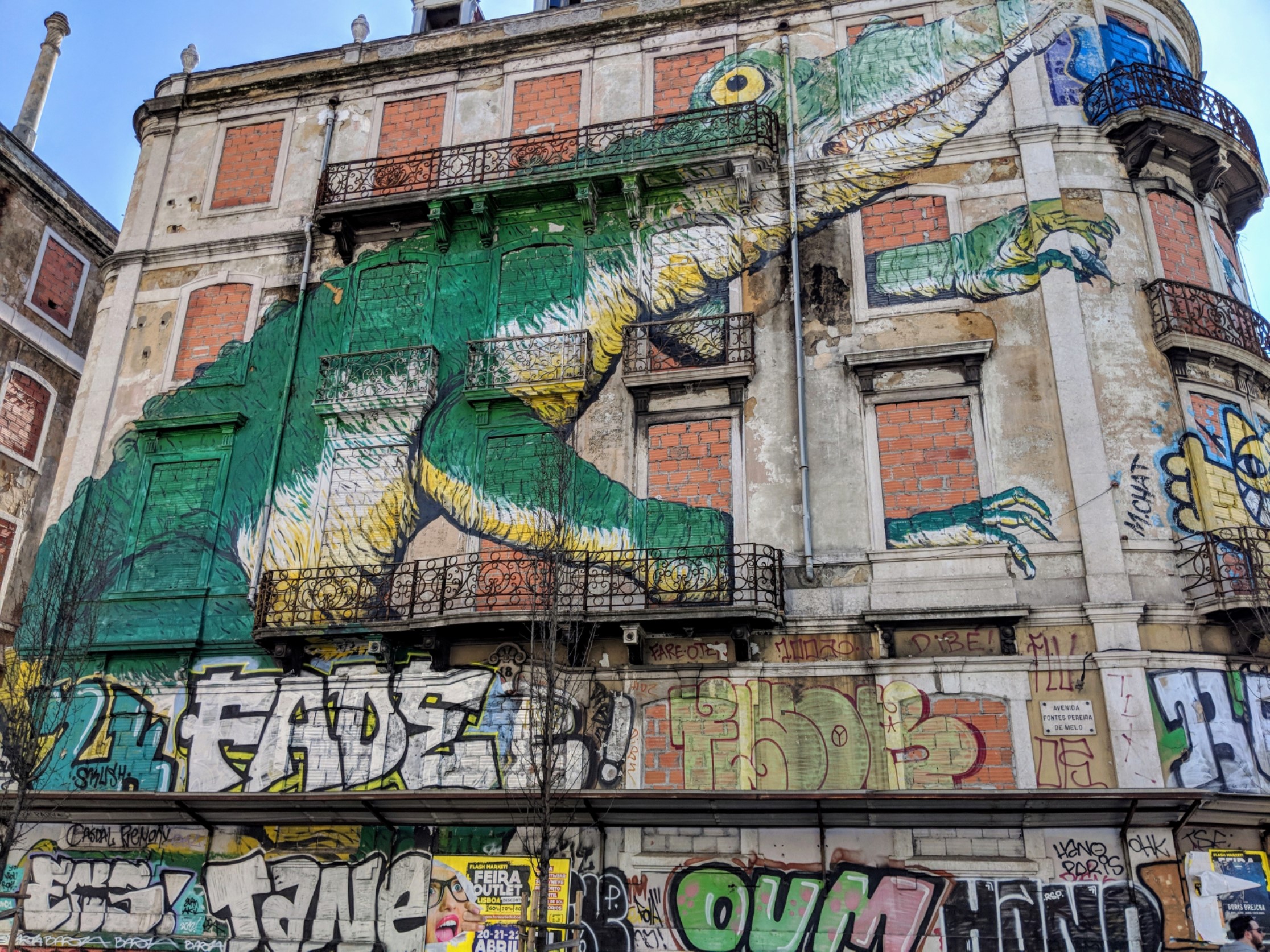 Artistic Graffiti, is it a thing? If you’d have asked me a week ago I’d probably have said no, but then I visited Lisbon which really opened my eyes to street art in Portugal.

I had no idea that Lisbon was well known for its street artists until I stumbled upon The Crono Project whilst wondering the city. After a bit of research I found out that it was commissioned back in 2010 as a way of transforming abandoned buildings in the city.

I really started to take notice of all the different street art projects across Lisbon and realised that the capital is like an open art museum and easily one of the best street art spots in Europe.

Here are some of the pieces I spotted on the trip, from a graffiti crocodile through to a trash raccoon.

Where to stay in Lisbon? Check out my round up of the top hostels

Let’s start with the first pieces of street art I discovered. This was part of The Crono Project, established in 2010 as a collaboration to turn derelict buildings in Lisbon into pieces of creative art. The project saw 16 local and international famous street artists working together on these impressive designs.

The message couldn’t be clearer, it’s a ninja aiming a human sling shot at a man with a crown featuring the logos of the world’s biggest oil companies. Note that the oil giant is drinking from a globe through a straw.

Where to find it: Immediately after exiting Picoas metro station

This piece called ‘crocodile tears’ shows a crocodile climbing the building with a fish in his paw. In popular culture, crocodile tears generally refers to fake tears as crocodiles appear to weep tears whilst consuming their prey but it is merely a way of lubricating their eyes when out of the water for too long.

Where to find it: near Picoas Metro Station

Made from waste such as old car parts, discarded computers and equipment from abandoned factories, the piece is aimed at raising awareness of the sheer volume of things we throw away. Bordalo II is well known for his ‘big trash animal’ murals, stating “The garbage of one man is the treasure of another.”.

Where to find it: near Beleem cultural centre

The artist behind this one, Sam3, is known for his black shadow-like characters. In this piece, the giant shadow man is sticking his head and arms through the windows as if trying to make an escape from the abandoned building. The stars and moon that appear in the windows indicate that it’s at night – wait, shadows at night?

Where to find it: near Picoas Metro Station

Another piece from famous street artist Bordalo II, the ‘Plastic Fox’ as it is know, is part of an exhibition called ‘attero’ which featured similar pieces across the city. This is a fairly new piece of street art in Lisbon created on 2017.

Where to find it: near Beleem cultural centre

The Face in the Building

Instead of using the traditional spray paint method to create his pieces, Alexandre Farto, aka Vhils works by chipping the plaster and concrete away from the wall to create huge pieces of detailed and life like work such as this piece of street art in Lisbon.

Where to find it: Opposite Rua de Cascais, near Santo Amaro docks.

If visiting the previous mural, not far from this lies Village Underground Lisbon. Originally launched in London, this is a project that turns old unused objects like shipping containers and tram cars in to recycled workstations, restaurants, shops, etc – definitely worth checking out.

Other Street Art in Lisbon

There is so much great street art in Lisbon, both from famous street artists and little known local artists, I didn’t have anywhere near enough time to visit them all in my 3 day trip – but here are a few others I have starred on my map should I return.

It’s worth bearing in mind that there is other street art in Portugal beyond Lisbon, so if you’re visiting other cities, do some research and see what’s about.

This piece is cleverly executed across an eleven story building and features an old lady with a dog and a duck. The artist has cleverly given the work a third perspective showing a different story behind the scenes.

Where to find it: Avenida Afonso Costa (Olaias)

This one needs little description for any breaking bad fans, the artist wanted to paint a mural dedicated to Walter White and Jessie Pinkman.

Where to find it: Damaia, Lisbon

This giant horse merges the living with the un-living in a pastel coloured glory.

Where to find it: Rua Manuel Jesus Coehlo, near Avenida metro station.

This piece is called “Calçada” (pavement) and portrays singer Amália Rodrigues in the pavement. It is made out of traditional Portuguese paving stones and was actually created as a collaboration between Vhils and the city councils team who are responsible for paving the city.

Where to find it: Rua de São Tomé

I would love to hear about other street art in Lisbon or just more generally street art in Portugal if you come across any – share in the comments below.

Lisbon isn’t the only place with stunning street art in Europe, I can also recommend checking out the following places:

Lisbon City Guide: How to Spend 2 Days in Lisbon

19 Things Lisbon is Known For