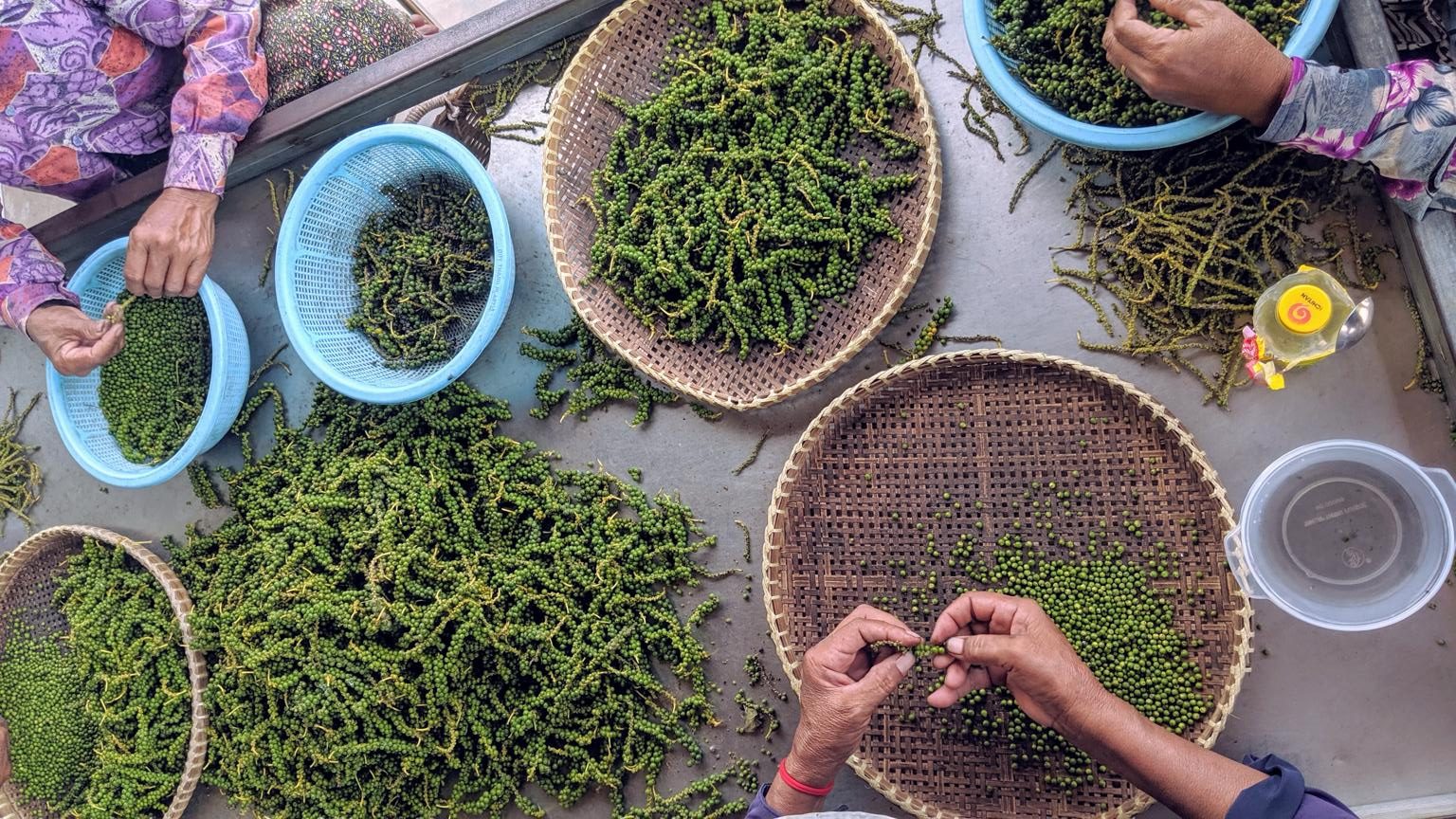 I’m no expert on pepper, so when our guide told us that Kampot pepper is the “best in the world”, I took it with a pinch of salt (or pepper). But after he explained how the pepper is grown and why it is so good, I’m tempted to believe him.

In this post I’ll share what to expect on a visit to La Plantation, near Kampot, from my recent backpacking trip in Cambodia.

Getting to La Plantation

La Plantation is a pepper plantation located about an hour outside of the sleepy riverside town of Kampot. The town itself is quite small, although there’s certainly no lack of things to do in Kampot and the surrounding areas, my favourite being an excursion to La Plantation pepper farm

The plantation is on the between Kampot and Kep, so we decided to make a day of it and also visit Kep crab market and beach afterwards. We hired scooters from our hostel at an incredible rate of $4 for 24 hours and I’m sure you could even get this cheaper if you shop around or have a bigger group.

To get to La Plantation, you’ll head west from Kampot on highway 33 and after about 10km you’ll turn on to a smaller road that will take you to the plantation. I’ll warn you now that this is a VERY bumpy road! In total it took us about 45 minutes to get there.

A Brief History of Kampot Pepper

The pepper industry in Kampot has a really interesting history. It took off under French colonial rule in Cambodia with around 8000 tons being harvested each year during the early 20th century. However, during the Cambodian civil war, the Khmer Rouge took pepper farmers for slave labour and left the industry to die, by the 1990’s, only 4 tons of Kampot pepper were being produced per year.

The industry is now experiencing a revival, chefs across the world swear by the quality of Kampot pepper and in some western countries it’s been known to reach almost €400/KG. No wonder the locals call it ‘black gold’! There is still progress to be made, in 2015 just 60 tons were produced, a long way off the level it once was.

On arrival we were shown to a restaurant area where we were presented with a beautiful view across the plantation.

Tours are available in English, French and Khmer and are completely free of charge. There are no set times but if you turn up, you shouldn’t have to wait any longer than half an hour before there are enough people to begin a tour.

Why Kampot Pepper is the ‘Best in the World’

We had a really knowledgeable guide who gave us an introduction to the pepper industry and the plantation. He described La Plantation as a social project, set up by Nathalie and Guy, a couple who originated from France and Belgium. Not only do they aim to grow the Kampot pepper industry, but to do so in a sustainable way that offers jobs to local people and finance the primary school in the local area.

He told us that Kampot pepper is the “best in the world” because of a number of key factors that provide perfect growing conditions including a high level of quartz in the soil, the atmospheric conditions provided by the elevated region near the sea and high rainfall.

It’s these perfect conditions that earnt Kampot pepper it’s status as the first Cambodian product to receive PGI (Protected Geographical Indication Designation) status from the EU, meaning any products sold in the EU as ‘Kampot Pepper’ must come from a designated region covering Kampot and Kep.

After being given an overview of Kampot pepper and La Plantation, it was time to taste the different types of pepper they produced.

There are just two varieties of pepper grown at La Plantation but a number of processing methods results in a variety of products to sample.

The first variety was the black pepper plant which produces both green and red berries. Around 90% of the berries are green, these can be eaten fresh but have a short shelf life, most are dried in the sun to become black peppercorns that most of us will be familiar with. The remaining 10% of the berries are red, hence these are more expensive. They can be soaked and their skin removed to become white peppercorns.

As we sampled each of the varieties, strange faces were being pulled around the table as the spiciness gradually increased. For me, this variety of pepper was my favourite, it had quite a powerful aroma and a slightly fruity taste that I’m not usually accustomed to in peppercorns.

La Plantation also grows another variety called red long pepper which is usually sundried and salted. I wasn’t as enticed by these peppers but the guide explained that they are popular for use on meats or in purees and marinades where they will be complimented with other spices.

Next we explored the plantation, sporting some traditional head wear provided by our guide.

The pepper plants had been surrounded by palm leaves which the guide explained was to protect the plans from the sunlight as they are very sensitive.

All Kampot pepper is organic so no chemicals are used at this plantation. Instead, the soil is enriched with manure and extract from nearby neem trees help keep insects away.

We were lucky to be able to see the workers sorting the different berries from the peppers as the harvesting season was almost over. Just a few weeks later and we’d have missed this. Our guide explained that the process could be further automated but the owners would rather keep it this way to provide more jobs to the community, up to 150 workers will be employed during peak season.

Walking around the plantation, our guide pointed out many other fruits being grown including banana trees, pineapples and turmeric. We ended the tour back at the restaurant which also doubled as a shop where we could purchase the pepper or make a donation.

Other Things in the Area

We combined our plantation with a visit to Kep crab market and beach which were both great, Kep was about another 45 minutes driving. There is also the nearby Secret Lake which can be seen in the distance from La Plantation or Phnom Chhngok Cave Temple.

How to Spend 3 Weeks in Cambodia

A Guide to Tanah Rata and the Cameron Highlands, Malaysia