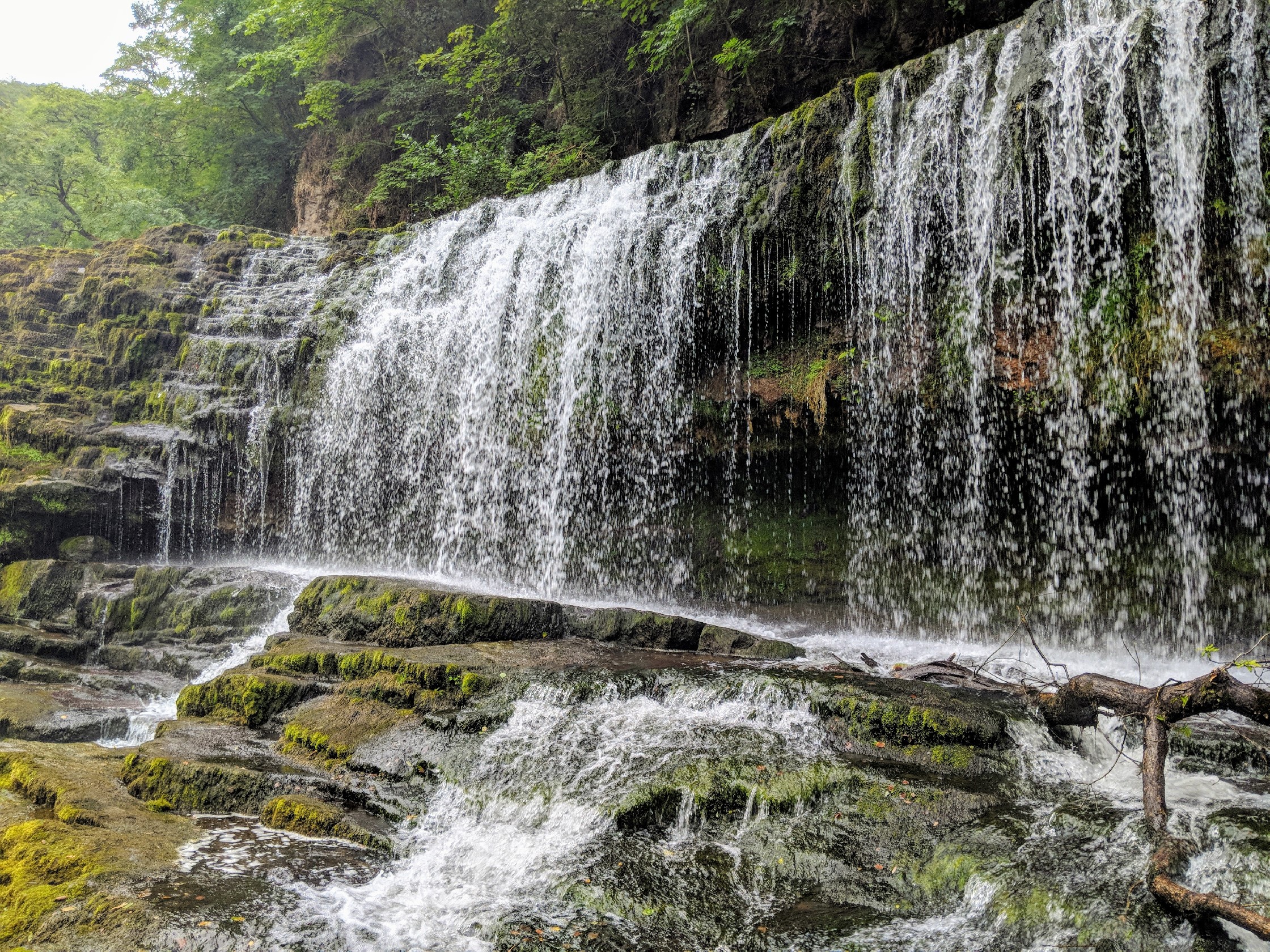 On my mission to discover more of my home country in Wales, I set out to experience the Four Waterfalls Walk (also known as the Four Falls Trail).

Despite a day of rain and showers, as you’d expect in Wales, it was an epic adventure which I’ll share with you in this guide.

About the Four Falls Walk and Waterfall County

The Four Waterfalls Walk is a trail that encompasses four beautiful waterfalls in Ystradfellte which forms part of an area in the Brecon Beacons known as waterfall county.

This is one of the best areas to find waterfalls in Wales with more per square mile than anywhere else in the UK.

Waterfall county is an area full of caves, gorges and, of course, waterfalls. It is not far from another major waterfall, Sgwd Henrydd, which was used as a filming location in the recent batman trilogy. But I’m saving this one for another day!

The trip did not disappoint, the 4 waterfalls walk is a spectacular day out. As you can expect in Wales, it did rain during our visit, but this did not put us off, the trail can be enjoyed whatever the weather.

The Four Waterfalls Walk begins at a large car park in the Brecon Beacons called Gwaun Hepste costing £4 for cars and £7 for mini buses. The closest postcode is CF44 9JF but you will get better directions by typing ‘Gwaun Hepste’ in to your sat nav.

Below is a photograph of the route map on site at the four falls. There are two paths mapped out:

The red dotted path is the official walking route and is best suited for families or a casual stroll.

The black route I have outlined over the map is the route we took. It’s the old route that goes right along the river edge, this allows you to take a more natural trail along the riverside as opposed to the man made trail and you’ll avoid significantly doubling back on yourself as you can visit the waterfalls in a circular trail. There are steep edges so I wouldn’t recommend it for children.

What are the Four Waterfalls?

Roughly translates as ‘fall of the white meadow’, height: 9m.

Once you leave the car park and head towards the trail, Sgwd Clun Gwyn is the first waterfall you’ll come across, it’s approximately 3km walk from the car park. This one is easily accessible as soon as you hit the main trail, it’s the smallest of the 4 waterfalls.

Once you have viewed this, the official route would advise you to head back to the main path and follow the red dotted trail towards Sgwd Y Pannwr.

However, if you plan to follow my alternative route, head straight down the side of the river. Don’t be put off by the sign saying ‘dangerous path’, it’s not that bad at all, even in wet conditions as it was when I visited.

Next you’ll stumble upon Sgwd Isaf Clun-Gwyn, although you’ll probably hear it’s thundering before you actually see it.

This water storms over the edge and flows across the rocks at the bottom. It was pretty intense during summer months and locals told me it was even heavier during the winter.

You can get quite close to the fall so it’s a great opportunity to grab some profile pic worthy selfies.

Roughly translates as ‘fall of the woollen washer’, height: 15m.

The third waterfall of the day (or second if following the official route) was the least impressive out of the four in my opinion but still a great spot to take a moment and enjoy the natural surroundings.

Next, rejoin the green dotted trail and head towards the grand finale.

Roughly translates as ‘fall of the snow’, height: 10m.

To get to the final waterfall, you’ll need to venture down a number of flights of steps and across some rocks but the trek is worth it.

Sgwd Yr Eira flows over the 50 foot drop at three separate points although in wetter months this will resemble a curtain of water as all three merge to one.

The best part about this Sgwd Ye Eira is the path that goes directly behind the waterfall itself. Originally used by sheep farmers, it is now laden with tourists. You can put your hands, head, or whatever body parts you like in to the water stream, I even spotted some people going for a swim (crazy given it was a wet and cold day!).

You can then head back to the car park via the red dotted trail to complete the route.

Here are a few top tips to make the most of your journey:

If you’ve still got an appetite for brecon waterfalls after completing the Four Waterfalls Trail, nearby you’ll find Sgwd Henrhyd or Henrhyd falls, used in the filming of Batman – The Dark Knight Rises. This is the tallest waterfall in South Wales and sure to give you that taste of Hollywood you were looking for.

Where else to visit in Wales? If you’re heading to North Wales, here are five reasons why you should visit Snowdonia National Park.

29 Things Wales is Famous For

14 Epic Waterfalls in Wales [+ how to see them]