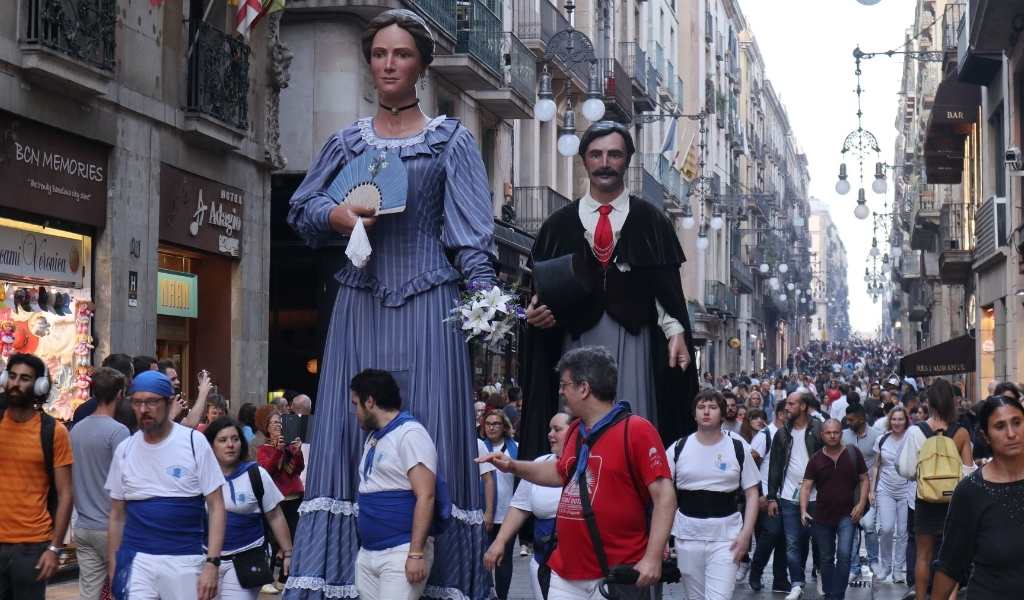 Barcelona is the second biggest city in Spain by population and one of the most visited tourist destinations in Europe.

Most people are drawn in by the bustling city, the beautiful coastline or the rugged mountains. But what is the city really known for?

Well, I’ve pulled together this list of 17 things that have put Barcelona on the map.

You might not have noticed, but most of Barcelona’s pavements are made up of 20x20cm concrete tiles known as Panot tiles.

In fact, it’s estimated that they cover more than 5million square meters.

These tiles were first used in the city to help with the muddy streets that had become a problem in the 20th century, but they have since become a symbol of Barcelona.

There are five main designs: a flower, a skull, concentric circles, four panels and one with four panels and four circles. However, you’ll see unique designs in certain parts of the city.

Barcelona’s football club (Soccer for my American friends), which plays in the top Spanish football league, La Liga, has earnt a name as one of the top football clubs in the world.

It has one of the biggest fan bases in the world and has a huge trophy room with over 70 domestic trophies and 20 international trophies that include the likes of the champions league and the FIFA club world cup.

The stadium itself is also a notable attraction in Barcelona. The Nou Camp is Europe’s largest stadium with a capacity of just under 100,000.

It’s open to visitors and has an extensive museum with memorabilia from across the years.

Barcelona might not be the capital city of Spain, but it is the capital of Catalonia, an autonomous region in the North of Spain.

Barcelona is also the most visited city in Spain and one of the most popular tourist destinations in Europe.

The Sagrada Familia has become a symbol of Barcelona. This iconic basilica was the masterpiece of Spanish architect Antoni Gaudi and incorporates his unique fairytale-esque style.

It’s been over a century since the foundations were laid, yet the building is still under construction with current estimates expecting completion in 2026.

Over its lifetime, the design has grown in scale and significance, having been upgraded from the original church to a basilica.

The building is already open for visitors with ticket sales funding the continued construction.

The Sagrada Familia isn’t the only Gaudi attraction that Barcelona has to offer. Spread across the city are numerous other buildings that Spain’s most famous architect had a hand in.

Some of his other famous pieces to visit in the city include Park Guell which is a beautiful park with sculptures and small buildings designed by Gaudi, and Casa Batlló which is a home that Gaudi was commissioned to design for the Batlló family and is now open to the public.

These 6 buildings along with Gaudi’s work on the Sagrada Familia are all part of a UNESCO heritage site dedicated to preserving his work.

Montserrat is the well-known mountain just outside of Barcelona that is part of the Catalan Pre-Coastal Range. It has multiple peaks, with the highest at 1,236 m.

The mountain is a popular day trip from Barcelona thanks to the monastery that has been built into the top of the mountain, Santa Maria de Montserrat.

The Benedictine monastery was first built in the 11th century and still houses around 70 monks to this day. It’s accessible to visitors via a rack railway or cable car.

Barcelona has two cable car lines. The first is Port Vell Aerial Tramway which connects the beach to Montjuïc hill, this was the original cable car in Barcelona launched in 1931 and offers views across the ocean as you ascend.

The second is the Telefèric de Montjuïc which runs from the bottom of Montjuïc hill, near Montjuïc park, to the top. This was launched much later in 1970 to replace the funicular that was previously in place.

At the summit of Montjuïc hill lies an old military fortress, Montjuïc Castle.

The castle was built in 1640 and has played its part in many battles from the Siege of Barcelona right up to the Spanish Civil War when both sides used it to capture and torture political prisoners.

These days it is more of a tourist attraction than a military fortress.

Being the capital of Catalonia, you can expect some epic Catalan food in Barcelona. Cheeses and meats are a staple, but it also excels at seafood thanks to its location on the Mediterranean coast with access to fresh supply.

Some examples of great Catalonian dishes include Pan con tomate (toasted bread with tomatoes and seasoning), Escudellla (a traditional Catalan stew) and Esqueixada which is salt cod served with salad.

A personal favourite is Escalivada, made of roasted vegetables Catalan style including roasted pepper, onions and aubergine.

Barcelona is a melting pot of different cuisines from across Spain, including influences from the nearby Basque Country and other parts of the Mediterranean.

Barcelona is known for hosting some of the biggest and best festivals in Spain, if not in Europe.

When it comes to music festivals, the city plays host to Primavera Sound, a huge indie festival, and Sonar which is a dance music festival attracting some of the biggest names to headline.

Then there’s the more cultural festivals that take over the city and see locals out in droves. The biggest events are Sant Joan which sees huge bonfires across the city’s beaches, and La Merce which sees parades, fireworks and entertainment for a week-long celebration.

Barcelona is home to the Picasso museum which houses one of the most extensive collections of his work. It was the only museum to have opened during Picassos lifetime.

Although Picasso was born in Malaga, it is widely known that he spent much of his life in Barcelona, including at the height of his career, and called the city home.

Flamenco is an expressive dance that was first popularised in the South of Spain.

The dancing consists of hand clapping, foot tapping and body movements. But it’s not just the dancing, the guitar and the song are all part of the art form.

The dance dates back to the 18th century but soon spread to Barcelona and can be seen most nights in the city’s numerous Flamenco shows.

One of the most popular modern-day interpretations of Flamenco came from Rosalía, a singer-songwriter from Barcelona who has gone on to receive multiple Grammy awards.

Barcelona’s Gothic Quarter (known locally as Barri Gòtic) is the oldest part of the city centre with architecture and visible remnants from both Roman and Medieval periods.

The area is full of boutique shops, cafes and restaurants, attracting mainly tourists who have come to explore the hidden streets and alleys.

The art of building human towers is a tradition that first began in the nearby city of Valls but can now be seen across Catalonia including Barcelona.

Castellers are professionals that train in groups and compete to form the tallest towers. In 2015, a new height was reached as towers reached 10 levels high at the Coordinadora de Colles Castelleres de Catalunya.

The human towers of Catalonia were recognised by UNESCO as part of their intangible world heritage.

Barcelona famously hosted the 1992 summer Olympic Games which was the first games to be held after the cold war.

The games had a lasting impact on the city thanks to huge investment that saw many areas of the city rejuvenated and the creation of the Olympic Stadium.

Other areas of the city were transformed too, including the beach, the Olympic Port and Montjuïc.

Barcelona is famous for being one of the best beach cities and this was confirmed when National Geographic features it as no.1 in their top 10 beach cities in the world.

Barceloneta beach is the most well known and closest to reach from the city centre, but this is by no means the only beach.

The city has over 4km of coastline and a huge choice of beaches, some that attract locals, some popular with the LGBT community and even a nudist beach, hopefully you won’t find this accidentally.

Barcelona was heavily impacted in the Spanish Civil War with an uprising in the city in 1936 playing a key role in its origin.

The Bunkers del Carmel which sit at the top of the hill Turó de la Rovira are one of the few visible remnants of this.

They housed anti-aircraft missiles to protect the city against attacks from the fascists.

Today, they have been renovated and make a great public viewpoint with a museum detailing their history.

Las Ramblas is a large street in Barcelona that runs from the city centre up to Plaça de Catalunya.

The street is lined with trees and full of street vendors selling food and souvenirs. There are also lots of coffee shops and a great market nearby.

Whilst I wouldn’t recommend going out of your way to visit the street, you’ll probably stumble across it as you navigate the city.

Las Ramblas has made a name for itself claiming to be the busiest pedestrianised street in Europe, but it’s also renowned for pick pockets so watch your back.

21 Facts About the Sagrada Familia That Might Surprise You