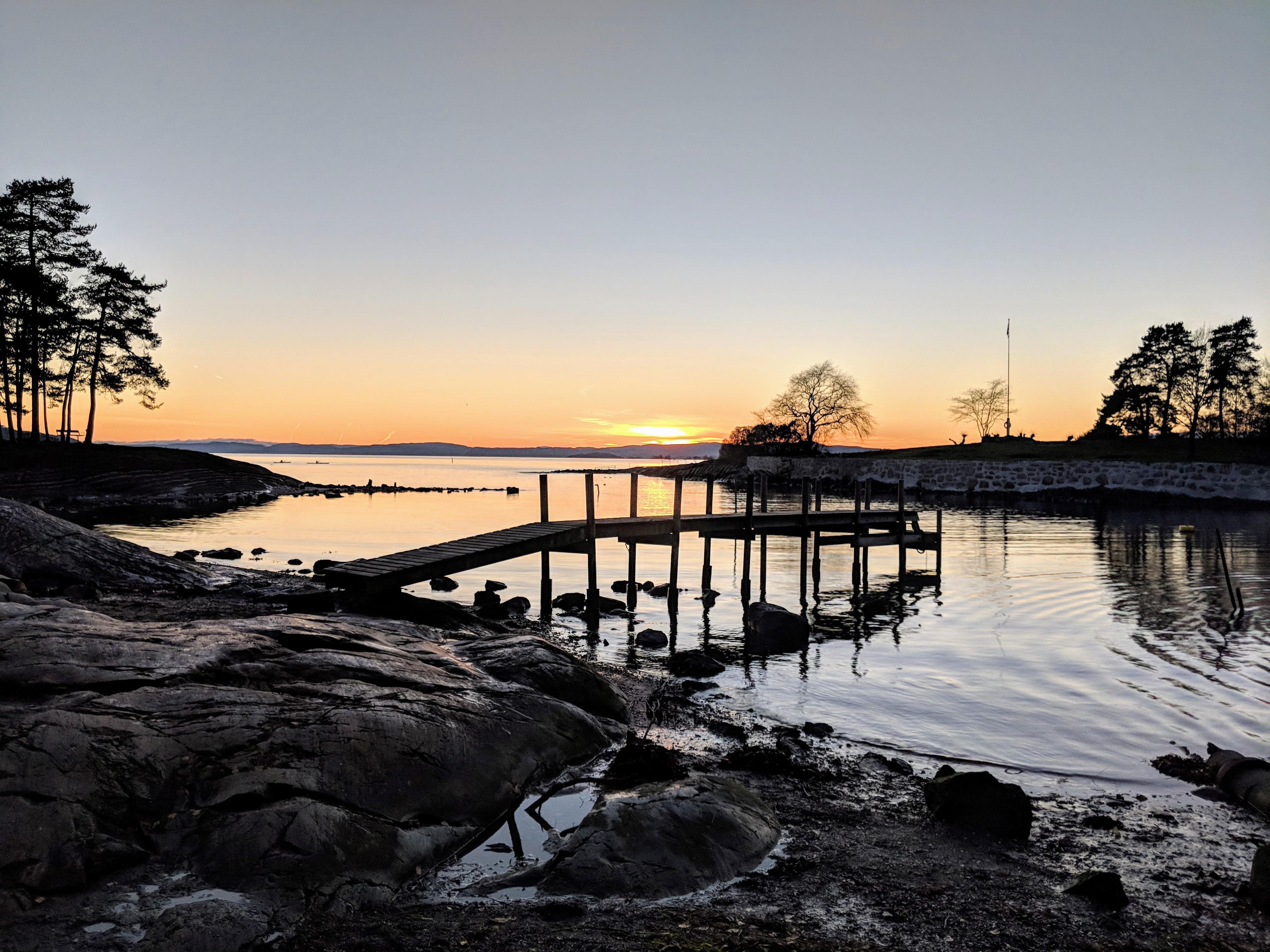 Oslo is the capital city of Norway situated on the 62 mile Oslofjord. For a capital city, it certainly feels different to most others in Europe. It is much smaller, surrounded by beautiful nature and has an abundance of parks and green spaces.

Oslo is known as the city of museums, with over 50 of them sprawled across the city, including art, history and sculpture museums. Each year the city hosts the Nobel peace prize award ceremony and is famous around the world for Ski jumping, being home to Holmenkollen Ski Jump, one of the most famous sporting arenas in the world.

Oslo is the 4th most expensive city in the world, tied with Sydney Australia according to the EIU Worldwide cost of living study.

Yet, despite the high cost of visiting Norway, Oslo tourism numbers are booming. The country is benefiting from the popularity of winter landscapes and the draw of the Northern Lights – I can certainly see why.

Here is my round-up of the top 12 attractions to visit to Oslo. If you need any help finding these attractions or wish to get further advice, I can recommend visiting the lovely people at Oslo tourism office, situated near the central station.

This list is not exhaustive and there are plenty of other things to do in Oslo, I’d love to hear your favourite attractions in the comments.

Situated in Frogner Park (sometimes incorrectly called Vigeland Park), the Vigeland sculpture installation is the largest collection of sculptures by one artist. Gustav Vigeland created over 200 sculptures in the park between 1924 and 1943, all of them are naked except for one.

The theme of the park is the circle of life. The sculptures are designed to show the emotions that humans experience at different points in their lives.

At the centre of the park is a huge monolith that took 14 years to carve, it features 121 humans figures but was actually carved from a single piece of stone.

See real life Viking ships at the Viking ship museum on the Bygdøy peninsular. The peninsular is a popular area for Oslo tourists to visit as it’s home to some of the most best museums in the city. The peninsular can be accessed by getting the number 30 bus from near the port.

The Viking Ship Museum features three impressive ships that were excavated from Viking ship burials (when a ship is used as the container for burying the dead, usually a rich or noble person).

There are plenty of other artefacts to see including sledges, horse carts and treasures from the graves. You’ll even discover the remains of the humans that were buried with the ships – lovely. I also spotted an impressive video projection that gives you an idea of life in the Viking ages and helps you understand how the ships were originally buried.

Also on the Bygdøy peninsular and within walking distance of the Viking ship museum is one of Oslo’s most popular attractions; The Fram museum. This museum is dedicated to telling the story of Norways polar exploration.

The main exhibit in the museum is Norway’s original and most famous polar exploration ship, The Fram. This ship was used on three polar expeditions and is now housed in the museum where visitors can board the ship and explore the decks, the cabins and engine room.

You’ll also find clothing and equipment used on the expedititions and learn about the treacherous conditions the teams face. Look out for the fake ice cave on the first floor too – I almost missed this.

Frequently cited as one of the best things to do in Oslo, the opera house has been uniquely designed allowing you to walk on the roof.

The design was the result of a competition held by the Norwegian government in which anyone could submit their ideas. Over 350 were put forward, but the winning design is based on an ice berg. The artists vision was that the humans strolling around on the roof would represent the penguins that would stroll around an ice berg.

You can get a great view from the roof, but if this isn’t for you the 49ft high windows mean the view is just as good from the inside.

Each year on 10th December the Nobel peace prize is awarded in Oslo. The ceremony takes place at Oslo city hall, attendees include the Norweigian royal family and prime minister.

When it’s not being used to present the peace prize, it is fully functional as a city hall and open for the public to explore. Inside you’ll discover art portraying Norwegian history and culture. Entrance is free and you’ll find guided tours year round.

Like many city halls, it has a large astronomical clock however this one is a little different as it’s set of 49 bells allow it to blast different melodies every hour from 7am until midnight. Sometimes these are traditional Norweigan songs, but other times you’ll find video game theme tunes such as Mario or Minecraft, film scores such as Jurrasic Park or popular music by the likes of Status Quo and Ed Sheeran. This spotify playlist features the current selection of songs.

Another notable attraction in Oslo is Akersus, a medieval castle/fortress situated within the city. Former uses include a military base and a prison. The Norwegian Ministry of Defence remains located here but the attraction is still open for the public to explore during week days.

On a clear day you’ll discover great views across the harbour, although I was not fortunate enough to see this. You’ll find guided tours on offer during peak periods.

Oslo is well known for it’s ski jump which has been rebuilt and upgraded several times, most notably for the 1952 winter olympics which took place in Oslo.

The unbelievably steep hill is still used in competitions today, visit during Winter and you might get to see some action. There’s also a museum dedicated to the history of Skiing that’s open year-round and is well worth a visit.

When visiting Oslo, try to find time to see the city from the huge fjord that it dids upon. Using a regular public transport ticket (or an Oslo pass if you’ve invested in one), you can hop on and off the ferries for a very cheap day.

Take a ferry from Aker Brygge and spend a day exploring the islands and peninsulas across the fjord or simply enjoy a cruise aboard a ferry for a few hours. Some of the ferries do not run year round so be sure to check timetables before you go.

You’ll be surprised to hear that Oslo has a beautiful beach that can be visited at any time of year.

In the summer, Huk beach is booming with tourists and locals soaking up the sun. Whilst in the cold winter months, the beach makes a great spot to enjoy the fresh air and watch the early evening sunset.

For those who regularly read this blog, you’ll know that not many ‘best things to do in…’ posts go by without mentioning a walking tour. I love to learn about the history and tradition of a city and walking tours are a great way to do this.

I went on free Oslo tour which was very informative, visiting the opera house, fortress, harbour and finishing at the national theatre. It was lead by a local who was great at sharing stories and answering questions. However on a Saturday the group was much larger than I would have liked so perhaps avoid taking this one on a weekend if you can.

Finally on my list of 11 things to do in Oslo is the Palace. Built in 1849, the royal palace near at the northwest end of the main street (Karl Johan’s Gatis) is still home to Norway’s monarchy today. It may be a lot smaller than other royal residences across Europe, but it is just as magnificent.

During summer months the palace is open to the public for guided tours allowing you to marvel at the interior. For the months when it is not open, you can still wonder around the gardens and catch changing of the guards everyday at 1.30pm.

Oslo’s recently renovated harbour Aker Brygge is a great place to visit for food and drink. You’ll find lots of cafes, restaurants and bars along the waterfront, many offer outdoor dining for a beautiful backdrop across the Oslofjord.

For the best weather in Oslo, visit between late April to early September. Remember that July and August are peak times in Europe so you may wish to avoid these two months if you’re looking to avoid the crowds. As with all Scandinavian countries, there are plenty of attractions throughout the year, including lots of winter festivities.

17 Things Oslo is Famous For