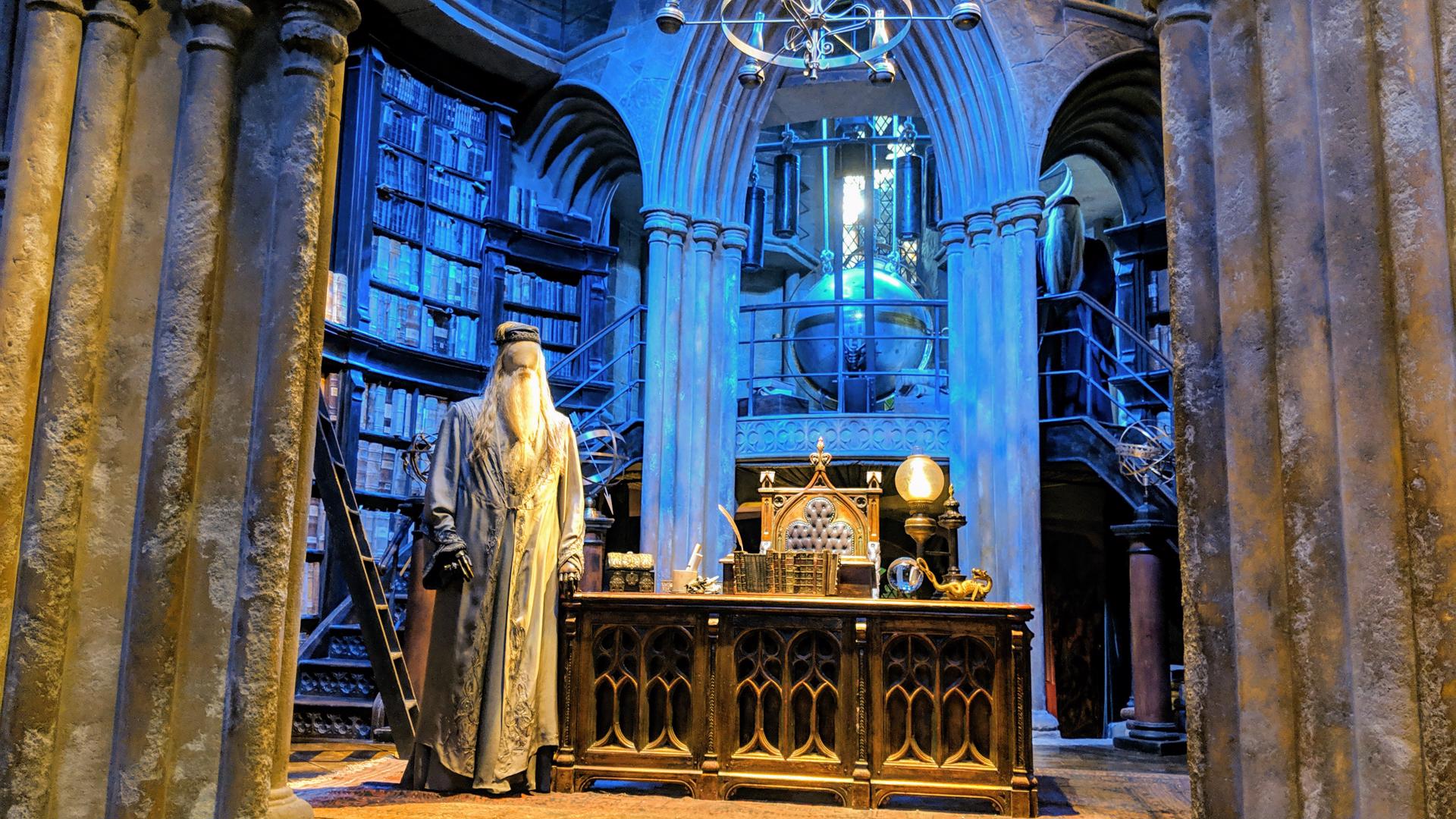 I’m an unashamed Harry Potter fan. I remember reading the books and watching the films during my teenage years. I had a huge shock hearing Hermione’s name in the film for the first time after years of reading it as ‘Her-Moyn’ in my head.

Last week, I finally got the chance to visit Warner Brother Studio Tour London: The Making of Harry Potter. I managed to disguise the entire weekend as a birthday present for my younger brother but we all know who it was really for!

The studios were originally an aircraft factory but for 10 years played host to 588 sets created for the Harry Potter film franchise. Many of the sets were kept in case they were needed later on. But once filming had ended, Warner Bros decided to display the iconic sets for fans to enjoy – Hurrayy!

Here’s what to expect as well as tips for your visit to Warner Brothers Studio Tour London:

The easiest way to arrive by public transport is on the train to Watford Junction train station where there is a shuttle bus straight to the entrance of the studio tour. There was an information video playing on the shuttle bus which got us really excited for the day ahead.

When you first enter the tour, you’ll be guided through a series of rooms including a cinematic experience featuring cast from the Harry Potter films and The Great Hall itself. If someone has a special occasion like a birthday or wedding, be sure to volunteer them for a special duty when asked – I won’t give away any spoilers here.

One of my favourite things about the tour is how friendly and helpful the staff are as they bring the experience alive, don’t be afraid to ask any questions you like.

The first set we came across was The Great Hall. Here you’ll get your first glimpse at the level of detail the studios went to when producing the sets. I was shocked at how it had been intricately designed to be as lifelike as possible, every single detail was thought of.

This set was designed for the very first film and used throughout the franchise so it had to be very durable. Take some time to look at the costumes as well, you’ll find outfits for each of the four houses as well as the main teachers.

I could have spent more time viewing the exhibits here but unfortunately, we were rushed on before the next group came in. After the great hall, the rest of the tour is self-guided so you’re free to spend as much time as you want exploring each area.

Muggle Fact: The studios were almost entirely used up by the Harry Potter sets for the duration of the franchise, however some other films made use of the same sets such as Sherlock Holmes and Sweeny Todd which have a similar Victorian vibe.

The first stop is studio 1, this is where you’ll find an array of recognisable sets from the films including the Weasley kitchen, the potions dungeon, Gryffindor dorm room, and, my favourite, Dumbledore’s office.

Muggle Fact: Dumbledore’s office is filled with books, most of these are in fact telephone directories bound in leather.

There are also plenty of interactive activities, most of which are free to try, these include spell classes and broomstick practice against a green screen. Don’t forget to take a selfie in the Mirror of Erised from Harry Potter and the Philosophers Stone and see what your deepest desires are.

During our visit there were also some of the experts that worked on the sets dotted around the studio providing information and answering questions from budding fans.

I enjoyed the intricate details of the wands from each of the Witches and Wizards in the film, it was interesting to see the level of expertise that had gone in to these and how they reflect the characters personality and costume.

Muggle Fact : Almost 350 paintings lined Hogwarts, these were all hand painted and were actually paintings of the crew that worked on the film franchise.

Next you’ll enter the forbidden forest, not for the faint hearted!

All Aboard the Hogwarts Express

As you leave the forest, you’ll walk out on to a reconstruction of platform 9 ¾ where you’ll find the original Hogwarts Express used in the films, and you can even go onboard.

There’s an opportunity to get that famous pose with a luggage trolley as it disappears through the wall on to platform 9 ¾ and you’ll see how they recreated the interior of a carriage against a green screen to film well known scenes aboard the Hogwarts Express.

At the half way point, you can imagine being in Hogsmeade whilst you sip on a freshly poured butter beer. Unfortunately, it’s not as delicious as you might think, I wasn’t a fan at all! Try one to share before splashing out as it’s not cheap either. It’s non alcoholic so its suitable for children too.

In the courtyard you can take a ride on the Kinght Bus, explore number 4 Privet Drive and even go inside to see Harry’s cupboard under the stairs and his Hogwarts letters seemingly flying around the living rooms. I was in awe when I spotted the Ford Anglia outside and could resist hopping in for a photo.

Muggle Fact: The triple decker bus used as the knight bus was actually built and taken in to central London for use in filming, you can imagine what a challenge this was going under bridges.

Animatronics and the Art Department

I’d always assumed most of the special effects were done in post-production but I was amazed going in to the animatronics department to find out what really happens.

One of my personal favourites here is the monster book of monsters which can be seen in the glass cabinet in the centre but also look out for dobby and Hagrid.

Be sure to watch the information video with Warwick Davies as this sheds some light on what happens in this department and how the creatures go from concept to reality.

Top Up on Magical Supplies at Diagon Alley

Diagon Alley is based on a street called Cecil Court near Leicester square in London, featuring independent bookshops and antique stores. But you’ll encounter the actual set during your studio tour.

Look out for Gringotts bank, Olivanders gift shop and Weasleys Wizard Wheezes candy shop. Unfortunately, you only get to see the store fronts and can’t actually go inside. I’ve heard you need to visit Harry Potter World in Orlando to take a trip inside the stores, a little too far for us.

See Hogwarts in All its Glory

The final stop on the tour is a spectacular scale model of Hogwarts. You’ll initially see a smaller cardboard model which itself is pretty impressive but there is something really magical (excuse the pun) when you come across the scale model. It fills the entire room and the lighting fads in and out of daylight giving it that extra touch.

This model was actually used in the films, there are videos around the room that show you how the model was merged with live action to give the effect that events were actually happening at Hogwarts.

At the end of the tour is a gift shop, this is incredible. Even as a 26 years old, I was so tempted by one of the wands until I remembered that I have real life things to spend my money on like bills.

Tips For Your Visit

Muggle Fact: Did you know the Warner Brothers Studios at Leavesden are currently being used for the Fantastic Beasts spin off franchise including one of the largest sets ever build for the amphitheatre in the second film. Unfortunately you can’t yet visit these sets but fingers crossed for the future!

If you’re planning a trip to WB studios, why not theme your whole trip around the boy who lived. There are loads of great Harry Potter attractions in London, including platform 9 3/4 at Kings Cross Station, Charring Cross Road aka Diagon Alley and tons of other locations that were used in the films. We saw all of these attractions during the Sandermans Harry Potter tour which I can highly recommend, the route was great and our guide was really knowledgeable about the films.

Harry Potter fever isn’t limited to the UK, from the brand new Wizarding World of Harry Potter in Florida to the Ukraine Hogwarts, a university that hit headlines for it’s likeness to the magical school of witchcraft and wizardry.

Whilst you’re in London….

If you’re willing to step outside of the potter-sphere, London is full of other fantastic attractions too. Here are a few of the best ones to check out:

Museums – London is home to tons of great museums and the best thing is that most of them are free. Some of the top ones you need to visit are the Natural History Museum, British Museum and the RAF Museum.

Sky Garden – This is one of my favourite places to visit in London and yet again it’s free of charge. From the 43rd floor of a Fenchurch Street sky scraper (nicknamed the walkie talkie), you’ll get great views across London from the city’s highest public garden. Book in advance or visit early in the morning to get in for free.