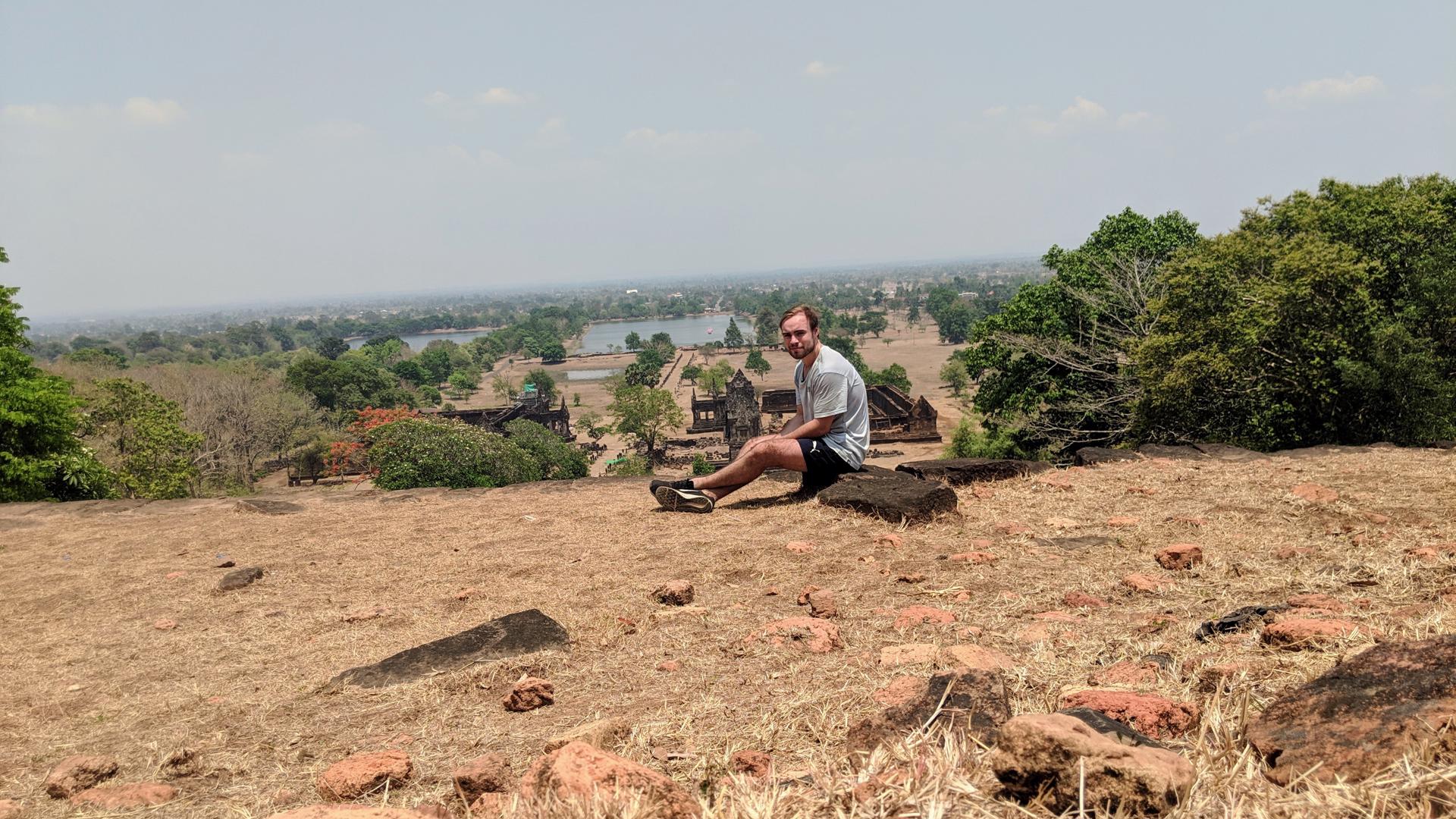 Amongst the beautiful scenery of Mount Phou Khao in the South of Laos is the ancient ruins of Wat Phou (also known as Vat Phou or Wat Phu), a temple dating back to the 11th Century. I took a day trip from Pakse, Laos to visit the ruins, passing through the small town of Champassak.

The Khmer temple is built in a similar style to those at Angkor Wat in Cambodia and a road south from the temple itself leads to the city of Angkor which was once the capital of the Khmer empire.

Whilst the ruins aren’t comparable to Angkor Wat in Cambodia, what really took me by surprise was how quiet and peaceful this temple was. I was the only visitor at the time and there were relatively few vendors which can’t be said about many attractions in South East Asia.

Looking for more information about Laos? Here are 18 Facts About Laos You Probably Didn’t Know.

The best part about visiting Champassak and Wat Phou is the scenic drive to get there with amazing open roads perfect for riding a bike or scooter. I rented a bike from Miss Noy in Pakse and can highly recommend them.

The drive from Pakse to Wat Phou took me just over 1 hour. There are a number of toll stations on the way but there is no charge if travelling by bike so you can drive straight through.

Nearing Wat Phou, I paased through Champassak, an adorable little town set against the beautiful backdrop of the surrounding mountains.

It was previously the capital of the Champassak kingdom and home to its royal family. However, these days Pakse is the capital of Champassak province and Champassak town itself remains a relatively quiet area with a few guest houses and shops lining it’s single street.

I always love driving through small towns in South East Asia where the locals always seem happy to see you and the children are waving like crazy.

Wat Phou is about 10km past Champassak town and is well sign posted.

There was a 5,000 kip charge to park the bike and entry to the temple was 50,000 kip. It’s always recommended to pay the parking charge and not try to avoid it by parking on the side of the street, this is a sure-fire way to get your bike stolen.

You’ll find a restaurant and café at the entrance to the temple but it’s quite pricey so I recommend taking food and drink with you or looking in Champassak town.

The ticket includes entry to an exhibition which is located just after the ticket gate. If, like me, you enjoy learning about the history and meaning of a temple before visiting, then this is well worth a stop.

There was information about the temple itself as well as the surrounding areas which include a road leading directly to Angkor Wat.

There is also information about the restoration work. There has been a lot of archaeological activity at the site over the past 30 years and in 2001 it was declared a UNESCO world heritage site.

After the exhibition, a shuttle bus will escort you half way to the temple – I was very grateful of this in the 40 degree heat of April!

Climbing to the Temple

The temple sprawls up the mountain starting from the mad made lake where the shuttle bus stops. It feels like a very grand entrance as you walk up the long symmetrical causeway which had previously hosted two barrays either side symbolising the oceans in Hindu mythology.

The path leads to the ruins of two palaces – the North and South palaces which make up the main section of the temple. Whilst their purpose is unknown, it can be noted that some of the designs are in an early Angkor Wat style.

As you proceed to climb the mountain, there are a number of other structures along the way including some old brick towers and terraces.

The climb to the top was quite steep but well worth it, I was rewarded with beautiful views across the countryside of Laos, this was made even better by the fact that I was the only visitor there are the time.

At the top is a sanctuary with a Buddha shrine inside and many detailed carvings all around the building. The sanctuary was still in relatively good condition with exception for the roof which had mostly crumbled away and been replaced with a temporary wooden shelter.

Head past the sanctuary to the left and you’ll come across a natural spring coming from a large rock. This water is considered holy although the funnel which the water runs didn’t look too hygienic so I opted not to drink any of the water.

There are a few vendors near the sanctuary for a well deserved drink before heading back down.

Taking the Ferry Back to Pakse

I took a slightly different route back to Pakse for a change of scenery, I’d be advised that it was possible to take a ferry across the Mekong from Pakse and drive back on the East side of the river.

Not knowing what to expect, I turned up at the ferry crossing and to my surprise it was nothing more than 2 fishing boats tied together with wooden slats laid across them for the bike. It seemed to do the job and at 10,000 kip I can’t really complain.

Other Things To Do in Pakse

My day trip to Wat Phou was one of my favourite things to do in Pakse, Laos. It made me keen to explore more of Pakse by motorbike so the following day I ventured on to the Bolaven Plateau motorbike loop that also beings in Pakse.

I met some other travellers and together we spent 4 days on the loop consisting of coffee plantations, stunning waterfalls and amazing scenery.