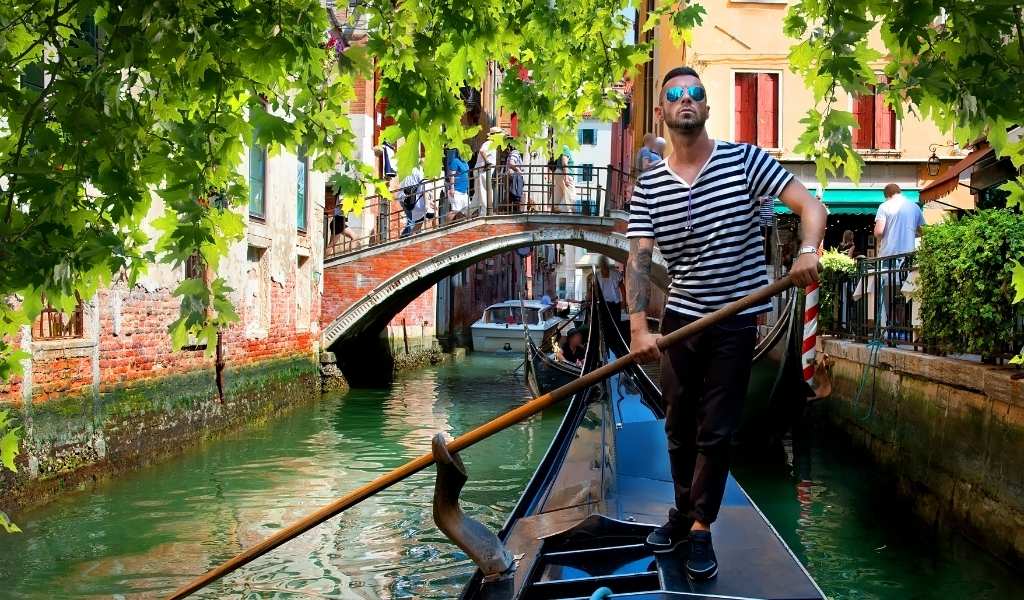 Venice is Italy’s most famous destination and one of the most recognisable cities in the world. The city is famed for its unique canals and captivating atmosphere.

But beyond the canals, the city has a lot more to offer. In this guide, I’ll share 14 things that Venice is famous for, from food to festivals.

What the Video Version:

Of course, first on the list had to be the canals which have become synonymous with Venice.

The city has no roads, instead 150 canals are used to get around, with boats for every purpose from emergency services to public transport.

The most famous canal in the city is the Grand Canal (known locally as Canalazzo) which winds straight through the centre of the city from the train station to St Mark’s Square.

The Grand Canal is 16ft deep and is lined by 170 grand buildings. It’s estimated that 60% of all traffic in Venice passes through it.

Piazza san Marco (also known as St Mark’s Square) is the main square in Venice full of shops, restaurants, and some of the city’s most well-known buildings.

It’s found at the far end of the city, where the Grand Canal meets Giudecca Canal.

One of the most recognisable landmarks in St Mark’s Square is St Mark’s Campanile, the bell tower of the nearby cathedral called, you guessed it, St Mark’s Basilica.

The tower was originally a watch tower to keep an eye on incoming ships, however these days it’s open for tourists to get a good view of the city.

Given that Venice is made up of 121 islands, separated by canals, it’s no surprise that the city has an impressive array of bridges to help get around.

There’s a total of 435 bridges in the city. The most used bridges are the four that cross the Grand Canal; the Rialto bridge, Ponte dell Accademia, the Scalzi Bridge and the Calatrava Bridge.

The latter is the newest addition and caused controversy for its modern appearance and high cost.

The earliest bridges in Venice were built in 1170AD. Back then, they would not have sides or handrails which resulted in a few accidents as you can imagine.

Venice Carnival (Carnevale di Venezia in Italian) is one of the biggest and best celebrations of its type, second only to Rio carnival.

The carnival dates back to 1162 when Venetians celebrated a military victory over the Patriarch of Aquileia.

During the annual event, millions of visitors flock to the city across a 2-3 week period to take part in events.

The main festivities include the Flight of the Angel opening ceremony in St Mark’s Square, costume parades, mask competitions and concerts.

Venetian masks (more about these below) are widely worn in the streets and are essential at the masquerade balls that take place during the celebrations.

Gondolas have become a staple of Venetian canals. These traditional black rowing boats are the equivalent of a taxi in this roadless city.

Many years ago, there would have been 10,000 or more gondola’s in Venice, however today there are about 400 as many locals and tourists will use the public transport.

Becoming a gondolier isn’t as easy as you might think. It takes 400 hours of training and you need an apprenticeship with an existing gondolier. There are only 3 or 4 new gondoliers each year.

The Venice film festival is one of the top three in the world, alongside Cannes and Berlin.

It was founded in 1932 when the very first film to be shown was Rouben Mamoulian’s Dr Jekyll and Mr Hyde. It now shows around 150 films each year, attracting more than 50,000 visitors from the film industry.

It is held on the island of Lido where Venice’s beaches and premium hotels can be found.

Doges palace is one of the most important landmarks in St Mark’s Square.

The Doge was equivalent to the duke or leader of Venice when it was a republic between the 8th and 18th centuries. This palace would have been his main residence.

The palace was built in a Gothic style with large stained-glass windows. Inside, you’ll find elaborate artwork on the ceilings and portraits of each Doge who resided in the palace.

Since its original construction in 1340, the building has been rebuilt numerous times after fires burnt it to the ground.

Venice has a long history in glass making as early as the 13th century and at one point was the biggest glassmaking hub in Europe.

Today, much of the glass making in Venice is purely for artistic purposes. There are still glass factories on the island of Murano that tourists can visit, alongside artist studios.

A Frittelle is a Venetian-style doughnut that is fried and served with a choice of fillings ranging from cream, apple or chocolate.

They were first popularised at Venice carnival but can be found around the city year-round as a dessert or snack.

Marco Polo was a venetian explorer and writer who spent a lot of time travelling Asia in the 13th century. He was born in Venice where he learnt the merchant trade from his father and uncle with whom he travelled.

Marco Polo wasn’t the first westerner to visit, but his journeys are well documented in his book ‘The Travels of Marco Polo’ which was one of the most comprehensive overviews of Eastern culture at the time.

He spent many years living in China and serving Kublai Khan for whom he undertook diplomatic missions to the countries that now make up modern day India, Sri Lanka, Myanmar, Indonesia and Vietnam.

Originally worn as part of Venice Carnival, Venetian masks have become a staple of Venice in their own right.

They are designed to keep the wearer anonymous and hide their social status, allowing them to socialise and romanticise freely and without judgement.

The masks were also used during political decision making, by females to socialise in male dominated environments and sometimes even for crime.

There are many styles of venetian mask, the most popular being the baùtta which covers the wearers entire face but leaving the mouth free for consuming food and drink.

San Giorgio Maggiore is an island that lies across the Giudecca canal. It’s known for the Benedictine church of the same name that dominates the island.

The current church was the third one to be built on the site after an Earthquake destroyed the original.

It is one of the most popular photo spots and was featured in the famous painting by Monet, Saint-Georges Majeur au Crepuscule (translates as San Giorgio Maggiore by Twilight).

The island can be visited on public transport where you can take a full tour of the church, however most tourists will opt to see it from the bell tower in St Mark’s Square which looks across the Giudecca canal.

Venice is known for having one of the biggest problems with over tourism that’s having a huge effect on the city.

With a population of just 55,000, it receives 20 million visitors per year. The tourist hotspots become overwhelmed and it pushes up the cost of living for locals in the city.

Cruise ships are one of the biggest problems, not only can they bring more than 40,000 visitors at once, but they displace huge amounts of water upon arrival in the lagoon which is damaging the city’s foundations.

A well known fact about Venice is that it regularly floods due to a phenomenon known as ‘Acqua Alta’ which causes the tides to rise significantly.

The city has become very good at forecasting when Acqua Alta will occur and is able to alert residents and businesses owners via sirens, phone and SMS up to 48 hours in advance.

St Mark’s Square is one of the worst affected places during the phenomenon, temporary raised platforms will be placed so people can get around.

It is only considered an Acqua Alta when the tides rise above 90cm, anything below this won’t cause much damage.